With more than three months remaining before this year’s Indianapolis 500, the green flag has already dropped.

The iconic symbol that has started the race for more than a century is traveling the world this year to raise awareness for what long has been known as “The Greatest Spectacle in Racing.” 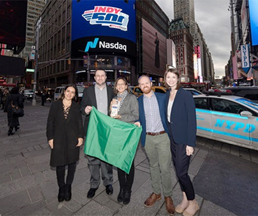 Alexander Rossi, the 2016 Indy 500 champion, waved the green flag on Jan. 28 at the National Hockey League All-Star Game in Tampa, Florida, where he also appeared in front of the arena with his Andretti Autosport open-wheel race car.

Speedway officials are promising many more stops before this year’s race on May 27 and are inviting fans to track the tour at IMS.com/GreenFlagRelay, a site that features an interactive map, photos and video. On social media, the campaign can be tracked using the hashtag #GreenFlagRelay.

Speedway officials are keeping some of the details of the tour close to the vest, including precise times and locations of the stops. But some broad strokes of the marketing plan have emerged.

The flag will make 10 to 15 appearances in total, IMS officials said, including stops in Chicago, Washington D.C., Los Angeles, London and Paris.

"We’re focused on iconic events and settings that align well with the 500 brand and the importance of our event," Speedway spokesman Alex Damron told IBJ Wednesday. "We have quite a few [stops] already set, but we also built in some flexibility as we knew people would come to us with ideas once we made the announcement."

“Watching the green flag drop on Indy 500 race day is a moment our fans wait for all year,” Indianapolis Motor Speedway President Doug Boles said in a media statement. “For everyone who loves race day, the green flag has come to symbolize high speeds, breathtaking competition, iconic tradition and pageantry, and so much more. Fans are going to enjoy seeing the flag embraced at so many meaningful venues and events this year as the countdown to the Indy 500 continues.”

The Indianapolis Motor Speedway and IndyCar Series have punched the gas on their marketing efforts since Mark Miles became CEO of parent firm Hulman & Co. in late 2012.

Initiatives under Miles include involvement in the North American International Auto Show, where it unveiled its new car this year; targeting more consumer-oriented sponsors; and forging a marketing agreement with USA Today Sports Media Group.

Under Miles' and Boles' direction, the Speedway also has crafted cross-promotional deals with other local sports teams.

For the last two years, the Speedway has sent milk bottles locally and nationally in the build-up to the race. Those bottles have been delivered to people like Indianapolis Mayor Joe Hogsett and members of the Colts and Pacers, as well as SportsCenter anchors, celebrities and others.

"The idea [for the green flag tour] came about as we were discussing the success of our 100th running milk bottle campaign and looking for an additional way to promote the 500 with another iconic race symbol during our countdown to the 102nd," Damron explained.