This week, a young adult best-seller is staged. Plus some thoughts on school field trips.
__________

I haven’t read “The Giver,” Lois Lowry’s Newberry Medal-winning novel that has
become a staple in middle and high school English classes. I knew its reputation as a kind of preteen
“Brave New World,” but had no knowledge of the specifics of its utopian/dystopian world.

Ideally, that wouldn’t matter. I should still be able to enjoy my theatrical experience
with playwright Eric Coble’s adaptation of the book, currently on stage at the Indiana Repertory
Theatre (where it runs through Nov. 21). After all, I didn’t read “Crime and Punishment,” but
was nonetheless knocked out by the IRT’s production last season. And I’ll confess to still never having finished
“Les Miserables” or even trying “Nicholas Nickleby,” but reading them wasn’t necessary before
enjoying their respective theatrical adaptations. 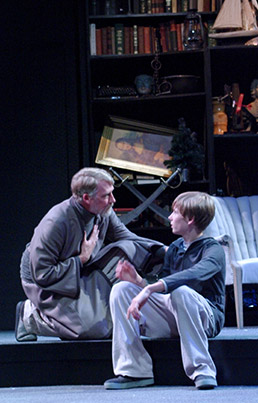 The job
of the playwright—abetted by cast and crew—is to construct an event that feels complete, beginning with the opening
moments of the play and closing with a curtain call. That experience certainly can be deepened by further reading—or
enhanced by prior exposure to source material or background—but if it doesn’t present itself as complete during
its brief time in the stage lights, the play comes across as a mere supplement to another experience.

Unfortunately,
that’s what happens here. I understand how schoolteachers bussing their charges to the IRT might be thrilled with what’s
being presented as “The Giver.” And I get how, for students who read the book, it sure beats sitting in a classroom.
IRT vets Jennifer Johansen, Robert K. Johansen and Fred Marshall lend weight to the adult characters, even though the playwright
seems to find only one note for each. Also, none of them—thanks to the premise of the show—evolve. The younger
side of the cast performs admirably, even with much of the narrative weight on them (a relief after last season’s “To
Kill a Mockingbird”). And director Richard J. Roberts and his design team consistently find innovative ways to give
the play some theatrical juice. Subtle use of color and some swift and clever transitions hint at the play this could have
been.

Alas, none of the valiant work by the IRTers can overcome the play’s structural flaws and dependence
on prior reading of the novel. An interesting world is posited—one in which pain and choice have been removed in favor
of security—but potentially dramatic developments are merely hinted at and then dropped. Worse, the truncated, impenetrable-to-those-who-didn’t-read-the
book ending is guaranteed to leave the previously uninitiated scratching their heads.
__________

I opted
to attend “The Giver” at a student matinee and was pleased to see the students completely
engaged in what was happening on stage during the hour-and-a-half/no intermission production.

It reminded me that much of my passion for theater was developed on school field trips. Growing up
in a town without theater, I weaseled my way onto any field trip I could, sometimes signing up for membership
in groups just to be part of their trips. As such, I witnessed the likes of James Earl Jones and Christopher
Plummer in “Othello”; the original company of “Sweeney Todd”; an odd, pre-“Cats,”
off-Broadway musical with actors playing horses; a western-set “Taming of the Shrew” and many more. Many of these
Playbills are still in my still-growing stack. Less often but still memorably, some of the school excursions featured trips
to art museums and galleries.

Here’s hoping attendees at “The Giver” and other student matinees
will hang onto the programs and the memories. And that administrators will continue to understand the value of freeing up
time and resources for teachers to take advantage of Indy’s professional cultural offerings. They can change lives.•