SMC Corp., which has its U.S. headquarters in Noblesville, is a classic manufacturing business. Its pneumatic valves go
into all sorts of assembly-line equipment, from machines that drop engines into cars to those that fold boxes for food processors.

For those who’ve come to associate the word “manufacturing” with “layoffs,” and “plant
closing,” Chris Abriani has some surprisingly upbeat news.

The recession decimated
Indiana’s auto-parts makers, but many other manufacturers in the state survived. After a year adrift in the recession,
they see signs of land ahead.

Federal stimulus grants and tax credits are playing a role for some, including Allison Transmission and Carrier Corp.
Others, including SMC, simply cut back so far that any degree of recovery will lead to hiring.

In fact, Becher said his clients, which include automotive-related and consumer-products companies,
actually worry that the recovery will come too quickly, and they and their suppliers won’t be able
to respond.

“A nice recovery, but a measured increase, would be really what they’re
hoping for,” Becher said.

Manufacturers hesitate to ramp up because they don’t
know what’s going to happen on key issues in Congress, including health insurance reform and carbon emissions,
said Pat Kiely, president of the Indiana Manufacturers Association.

“Most businesses are still hunkered
down,” Kiely said.

He will not deny that the mood is much improved—especially compared with this
past spring. However, he said, “The average manufacturer, year-over-year, is still down 30 percent.”

Many of his members are also wary of the so-called “W-shaped” recovery, which means
they would ramp up only to see business fall off again in 2010.

“They’re generally
optimistic for six to nine months,” Kiely said. “Beyond that, it wanes.”

Here are more details on where some of the top manufacturers in Indianapolis stand:

What it makes: active pharmaceutical ingredients; finished tablets and bottled
products, including insulin

Production-side employment was steady in 2009, but probably
won’t stay that way for long.

“Manufacturing’s going to continue to operate as it has in the past, but we
will look at all parts of the company for streamlining opportunities,” spokesman Mark Taylor said.

Lilly is restructuring in an effort to get new drugs out of its development pipeline. Its best-sellers,
Zyprexa and Cymbalta, lose patent exclusivity in 2011 and 2013, respectively. And the company admits that
even successful new drugs won’t immediately cover the lost revenue.

Allison is benefiting from the stimulus and rising demand for truck transmissions. (IBJ Photo/Robin Jerstad)

What it makes: transmissions for commercial trucks and military
vehicles

Aided by a stimulus grant and stronger-than-expected demand from commercial truck
owners, Allison is already pulling out of the depths of the recession.

In February, Allison made its first layoffs in 25 years. Then credit-rating
agencies downgraded its $4 million in corporate debt and raised questions whether the company could make it through the year
without refinancing.

Relief came in August, in a $62.8 million U.S. Department of Energy grant to work on hybrid
drive trains. According to a UAW newsletter, Allison plans to match that grant for a total investment of $125.6 million.

Snyder said the company is seeing volume pick up on several fronts, including work on a military vehicle. Allison
recently made 160 hires in skilled trades and general labor to replace some of the more than 400 UAW members who accepted
buyouts last year, he said.

What it makes:
gas turbine engines for military aircraft and helicopters

This was an eventful year for the stalwart aircraft-engine
maker. Rolls-Royce unveiled new facilities for “on-wing care” and regional customer training.
It’s investing $30 million to upgrade areas where it’s taking back 80,000
hours worth of work from outside suppliers.

In July, the company sealed
a deal with RotorWay International to supply its twin-seat helicopter, the Eagle 300T, with the new RR300
engine through 2017. All that work has led to 100 hires since January.

“Our balanced portfolio of defense,
commercial and small engines allows us to increase in some areas and decrease in others, while maintaining a consistent level
of work,” the company said in a prepared statement.

Rolls-Royce supplies engines for some heavily used
military aircraft, including the Global Hawk unmanned drone and the Osprey. The military orders have
made for a comfortable year, said Dave Atwood, bargaining chairman for UAW Local 933.

But
he noted that Rolls-Royce takes stock of its production costs every six months, and may outsource work
in the future. 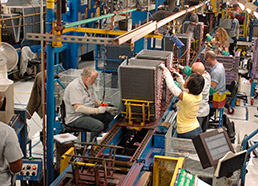 What it makes: residential gas furnaces

The world’s largest gas-furnace factory is a long way from its days
of trying to keep up with red-hot demand from homebuilders.

Its hope now lies in the higher-margin
replacement market, and perhaps a slow recovery in new construction. Boosted by a federal
tax credit for 95-percent efficient furnaces, the plant is calling back laid-off steelworkers and cranking up its
night shift.

“That’s driving a lot of our business right now,” said George Gann, president
of Unit 7 of United Steelworkers Local 1999. Total employment at the plant was about 2,000 four years
ago; it’s now down to 1,500.

The company shifted its focus back in 2007, and Plant
Manager Jean-Francois Brossoit said the local engineering department enabled the quick turn.

Sales of high-efficiency furnaces benefited last year from a spike in natural gas prices, and this
year from the $1,500 tax credit.

“Having that technology ready put us in a very good
position,” he said. “It was really, really critical to responding to what’s left of the market.”

What it makes: licensed apparel for professional and college sports

Most local residents want another Super Bowl win for the Indianapolis
Colts, but a surprise from a big-market NFL team, say the Chicago Bears or New York Jets, would be better
for Adidas Group in Indianapolis.

The company’s east-side facility specializes in
filling short orders, and that’s what retailers need when an athlete or team suddenly turns popular.
Even without dark-horse wins, the local division has more work these days because retailers
are loath to place advance orders, Plant Manager Blake Lundberg said.

“That’s
been the trend in retail. Especially with a difficult economy, it’s been a trend even more,”
Lundberg said.

Adidas Group cut 65 employees locally in January in a company-wide restructuring
after retailers suffered one of their worst Decembers in years. Lundberg said the plant has since hired about
150 people and is looking forward to a stronger 2010.

Wins and losses still drive demand, he said, “but
we’re trying to expand the base of what we do within the licensed apparel business.”

What
it makes: pneumatic valves and actuators

He added that SMC relied on attrition to pare back the production-side
workforce.

Food and packaging is driving the recent demand. Abriani said it’s not clear, though, whether
that’s thanks to real growth in the food-processing industry or SMC’s increasing market share.

Abriani
said he could ramp up more quickly.