The past year has been mighty unkind to the Capital Improvement Board, the entity charged with operating the city’s
professional sports venues and Indiana Convention Center.

A provision that allows the Indiana Pacers to break their lease after
10 years could trigger the additional cost to keep the team in the city. An agreement has yet to be reached, although CIB
officials continue to negotiate with the team. 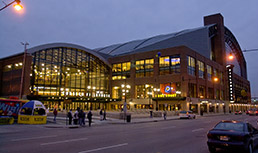 Excluding the Pacers dilemma,
CIB made great strides in 2009 to shore up its finances and is on target to turn the deficit into a surplus—additional
money that could be used in negotiations with the team.

The organization has improved its finances by making
$26 million in cuts this year and by avoiding $25.5 million in debt-service reserve payments. It also is poised to collect
roughly $11 million more in annual revenue.

CIB has reduced its operating budget from $78 million at the beginning
of this year to a proposed $63 million in 2010, although the organization anticipates spending as little as $52 million.

• $3.5 million in grant awards, including $2 million to cultural tourism efforts and $1 million in city arts funding.

• $2.5 million in salary and benefits costs from job cuts and continuing unpaid furloughs. Eleven positions
have been eliminated, and pay cuts range from 5 percent to 15 percent.

In addition, the General Assembly approved
a 1-percent increase in Marion County’s innkeepers’ tax, allowing the organization to capture an additional $3.4
million in annual revenue.