This week, some questionable officiating leads to a Harlem Globetrotters victory, a WWII kitchen sink drama—with
a twist—opens at the Phoenix, and blissful silliness takes center stage at Beef & Boards.
__________

I may not be the most sports-savvy person in Indianapolis, but I’m certain that I saw some pretty flagrant rule
violations during the Harlem Globetrotters Conseco Fieldhouse matchup against the Washington Generals Jan. 18. 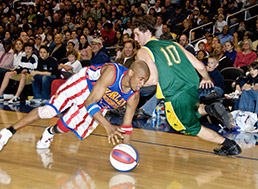 Am I wrong to believe that removing another player’s pants is a violation worth at least a few foul shots? Or that
dangling upside down from the rim should disqualify the preceding dunk? Nowhere in any rule book I’ve ever seen is it
sanctioned to acquire a purse from a woman in the stands, then lure her out to center court with promise of its return. To
expect a kiss in exchange for the goods would seem beyond an intentional foul. In any other place of business, it would be
grounds for a harassment lawsuit.

The Globetrotter/Generals game was rife with such uncalled fouls—from both teams. While the Washington
players seemed to behave in accordance with accepted basketball practice, their coach repeatedly crossed
the line. His most obvious breach: the use of a hypnotic umbrella on members of the Globetrotters team to get them
to do his bidding. Worse, the coach often left the sidelines and ventured onto the court during play to do so.

The crowd, which seemed overwhelmingly on the side of the Harlem team, heartily booed the schemes
of the Generals’ coach. Still, the ineffectual refs hardly seemed to notice. Rather than wait for
the officials to right the wrong, the unaffected Trotters discovered that the effects of the hypnosis could be negated by
the execution of a spectacular trick shot. Such shots being in ample supply, the team was soon back to normal, with little
damage done to their lead.

The Generals proved adept at quick three-pointers, thanks in part to the little care the Trotters seemed
to take when it came to defense. That, combined with a scorekeeper’s heavy hand, turned what should
have been a blowout into a three-point game as the clock ticked toward the final moments. It ended with the Globetrotters
up by five.

In a friendly bet with my guest, I took the more disciplined Generals and lost. I’m confident,
with more attentive officiating, things will go differently when the teams face off again at Conseco Fieldhouse in April.

The setup: May is the wife of a soldier serving overseas in WWII. While holding down the home front,
she’s inspired to explore beyond her own expectations of herself. When this means discovering the pleasures of
an art museum, she’s giddy with her newfound freedom. When it means the possibility of a physical relationship with
her longtime gal pal Billie, she isn’t quite so sure of the rightness of her exploration.

Alan Brody’s “The Housewives of Mannheim” focuses on a situation I’ve never seen
presented on stage or screen before. So why, in its local premiere at the Phoenix Theatre (through Feb.
6), did it feel so overtly familiar?

In a production with much to praise, what keeps it from maximum impact is the play itself. Brody effectively
sets things up in the first act, but is less inspired in the second. The play fishes for an effective
conclusion, but never quite finds one, settling for an attractive tableau rather than committed choices.
“Housewives” is upgraded, however, by performers who find nuance and truth even when they
aren’t supplied by the author.

In the central role, Lauren Briggeman inhabits not just May, but her kitchen as well. The show is well-grounded
in place, and designer James Gross has created a space that is both comforting and confining, accentuating
May’s core dilemma. Briggeman is beautiful, as the part requires, but she’s also got just
the right amount of self-conscious awkwardness. There’s a vulnerability to her that is endearing
and exciting. Allison Moody (seen last season at the Phoenix in “Mauritius”) could have easily taken
Billie into sitcom stylings, but instead she’s layered and engaging. Martha Jacobs is equally fine as a wheelchair-bound
former concert pianist, now a refugee stranger in what’s revealed as a too-familiar land. The only weak link in the
on-stage quartet is Wendy Peace, giving a never believable one-note performance in the show’s least interesting role
as Alice, the picture of stateside domesticity.
__________

Unlike the annual farces offered at Beef & Boards in previous Januarys, doors aren’t slammed
in “The Foreigner” (through Feb. 7). Instead, Ken Ludwig’s play, about a man pretending
to not understand English in order to be left alone, finds its biggest laughs in the verbal rather than
the physical—and that’s just fine.

The obvious reasons for the show’s comedic success are the well-wound play itself and the players
performing it here—particularly Kate Braun as the blissfully unaware innkeeper and Jeff Stockberger
as the title outsider (who only briefly steps into “Borat” territory). David Purdy is also
fine, particularly in a hilariously played breakfast scene with Stockberger.

Credit should also go to director Eddie Curry. He seems to completely understand that compassion for
the characters helps take the oft-staged comedy to the next level. Laughing is great. Laughing with characters
you love and believe is even better.•