Ricker Oil paid $3.9 million in 2009 to allow its customers the ease of swiping their Visas
and MasterCards every time they bought a gallon of gas, a carton of cigarettes or a “Ricker Pop” from a convenience
store soda fountain. Company President Jay Ricker complains that the fees shave away nearly all the profit in his business
of frequent transactions and razor-thin margins. 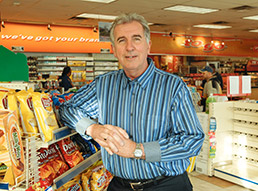 Ricker says customers want to use plastic, but it shaves away profit. (IBJ Photo/Robin Jerstad)

“If
somebody buys a pack of gum and charges it, I’d be better off to just give the gum than sell it
sometimes,” Ricker said.

In this deep recession, many retailers may soon share Ricker’s
lament. Credit cards have become so common that few retailers question their “interchange”
fee attached to every sale. But as tough times force businesses to analyze their bottom lines to the last significant digit,
like Ricker, they’ll discover more pennies are going to transaction fees than ever. And those pennies add up.

Blame the financial crisis. An Indiana University retail expert expects banks to ratchet up merchants’ interchange
fees as a result. But first, understand how the credit card system is structured.

The majority are supplied by major
banks, such as Chase, the largest issuer, with 119.4 million U.S. credit cards, or 21.2 percent market share. As of June 30,
Chase cardholders alone held $165.9 billion in outstanding debt.

Issuers like Chase and their partners, the Visa
and MasterCard networks, do offer retailers a significant service. Together, they instantly determine whether customers are
worthy of short-term, unsecured loans, then approve their transactions and extend credit via a secure IT system. For a fee
amounting to a small percentage of each purchase, the retailer transfers all risk of customer default. Interchange rates vary
depending on the size and nature of each business.

The retailer then gets paid, typically within 24 to 48 hours,
noted New York-based Chase Payment Tech Executive Vice President Mia Shernoff. And consumers often spend more when they’re
not limited by the amount of cash in their pockets.

“It’s fair because we’re enabling the economy
to continue with these instruments,” she said. “And we’re assuming all the risk. “Retailers, as all
businesses, are very cost- and expense-conscious. [But] it’s one component of their budget.”

Fees
on the rise

Ricker doesn’t begrudge the concept of the fee. He agrees credit
cards are a form of payment he must accept, and that they offer benefits to his business. But he questions why their costs
have crept up over the years. Ricker, who currently serves as chairman of the National Association of Convenience Stores,
said he now hands over 2.3 percent of every transaction in interchange fees. In other developed nations, like Australia and
New Zealand, Ricker said, the fees average about 0.5 percent.

“I think it’s because they can get
away with it here,” Ricker said. “I’m one business paying $3.9 million a year. So you can imagine the billions
and billions of dollars [at stake].”

Angling for relief, Ricker said his industry’s trade association
is pursuing a class-action lawsuit and simultaneously lobbying legislators in Washington, D.C. But it’s likely merchants’
interchange fees will go up, not down, in the near future, according to Theresa Williams, director of Indiana University’s
Center for Education and Research in Retailing.

The Obama administration is attempting to crack down on banks
and credit card networks, she said, curbing revenue-generating practices such as hiking consumers’ interest rates without
notice, penalizing them for late payments, and cutting off credit lines. In response, Williams said, banks are quietly boosting
credit card costs for retailers.

Small retailers will be hit hardest, she said. That’s because they lack
the leverage to negotiate the best rates. With its enormous volume, a big-box chain like Wal-Mart can bargain for a better
credit card interchange fee than any mom-and-pop operator can.

“It’s sort of like when you put water
in a balloon and you squeeze the middle,” she added. “The water goes somewhere.”

But Grant Monahan, president of the trade group Indiana Retail Council,
questions whether merchants ultimately can make up for increased credit card interchange fees by adjusting their price tags.
In a rough recession, he pointed out, consumers are more cost-sensitive than ever.

“In a perfect world,
retailers would pass along price. But retail is so competitive, it’s difficult to just pass along costs,” Monahan
said. “What retailers do, and they do it awfully darn well, is to constantly pursue other efficiencies in their operations
to lessen their cost of business. They can’t just pass it on. The competition won’t let you.”

Most of the action on this issue will happen at the national level, Monahan said. But in Indiana, his group is lobbying
the General Assembly to blunt retailers’ credit card fees on Indiana sales tax. He said the state’s 7-percent
sales tax shouldn’t be included in the amount of a transaction included in interchange fees.

“We
think that is truly unfair,” Monahan said.

Whatever merchant fees are attached, credit cards and their
debit card counterparts most likely will become even more common in the days to come.

There’s simply too
much momentum moving transactions away from cash.

“Why did McDonald’s start taking credit cards?
They already dominate market share with 45 percent in quick food,” Williams said. “With credit cards, they’ll
be an even more dominant player.”

“What you’re hearing from is the small-business owner who
says, ‘I’m investing in the service, but I’m barely breaking even,’” she added. “‘And
we’re not a non-profit.’”•