Home » LOU’S VIEWS: You won’t be bored with Weegee

This week, photographs by the legendary Weegee at the Indianapolis Museum of Art. Plus a visit from the national tour of
“A Chorus Line.”

Weegee wasn’t the kind of photographer you wanted to shoot your wedding—unless the bride was lying on the altar
with a big splotch of red on her white dress and the groom couldn’t return his tux because of the bullet holes. With
a darkroom in his trunk and a police scanner at the ready, Weegee (aka Arthur Fellig) often got to the scene of the crime
before the cops. And the black and white results transcended the tabloids. 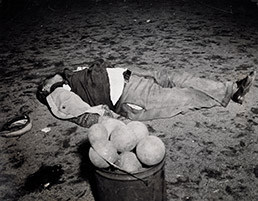 “This
was a friendly game of Bocci,” ca. 1939 (Photos/© Weegee/International Center of Photography/Getty Images)

There are a million stories in the naked city, but only a few photographers who could do the seedy ones justice—and
only one who could be considered both an ambulance chaser and an artist at the same time during the heydays of the 1930s and
1940s.

Curious? Well, prepare to do a little detective work to find “Shots in the Dark: Photos by Weegee the Famous”
at the Indianapolis Museum of Art (through Jan. 23). The show doesn’t get much attention on the IMA’s website.
And, oddly, this uniquely American show is tucked away inside the European Galleries.

It’s worth the search, though. Here, just about every picture does tell a story—a hit at a boccie match,
for instance, or an overcrowded store just before rationing becomes the law. The descriptions—many taken from Weegee’s
writing in such books as “Naked City”—add to the tales. “I like to get different shots and don’t
like to make the same shots the other dopes do,” said Weegee, which explains the focus, in one grouping, on feet and
legs. Or why he took the trouble to take an infrared camera into movie theaters to shoot patrons sleeping, making out and,
in one magical case, a beautiful, sad-eyed little boy staring at the screen. 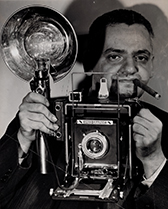 The IMA, too, seems to have some sharp ideas, such as combining three very different photos of people looking up (I’ll
let you learn for yourself what each is watching).

The experimental shots created once Weegee went to Hollywood in the 1950s are interesting but less evocative. He seamlessly
gives Bette Davis four eyes, but to what end? And his efforts to distort Picasso’s portrait are fun, but don’t
carry the weight of his work with lesser-known subjects. Still, they help round out the exhibition and show Weegee’s
range.

One of the best things about “Shots in the Dark” is that it represents less than a quarter of the Weegee photos
the IMA acquired in 2008. I’m looking forward to seeing the rest—besides the two that are juxtaposed with a Diane
Arbus shot in the contemporary art galleries upstairs. Bring ’em on.

The commercials that have been touting “A Chorus Line” as the best musical ever don’t do it any favors.

What began life in the 1970s as a revelatory, heartfelt look at career dancers trained not to stand out has evolved
into an icon, but one that is showing its age.

Unlike other musical theater landmarks, “A Chorus Line” doesn’t leave much—if any—room for
interpretation, either by actors or directors. It may be about the individuality of the otherwise anonymous, but ironically
it’s nearly impossible to make a production of it distinct. As such, any staging you see is more or less the same as
the previous one, with only minor adjustments for the new performers filling the same old shoes and leotards.

That doesn’t mean the tour that visited Clowes Hall (through April 25) wasn’t entertaining. It had the
expected strong mix of dancing and singing and the pleasure of getting to know the characters on the line. And the cast, for
the most part, felt alive rather than frozen in time (which deadened the last “Chorus Line” tour I saw years ago).

But “A Chorus Line” hasn’t aged nearly as well as its 1975-1976 season rival “Chicago.” Its
confessional style has been borrowed by dozens of other musicals—and, to an extent, by reality TV and talk shows. Its
minimalist design is now the go-to style for budget-conscious theater producers.

It’s still “A Chorus Line,” but it’s no longer a singular sensation.•