The men are looking at an early version of one of Edison’s many inventions: the Ediphone, an automated dictating machine that would revolutionize corporate communications. They were gathered for the 50th anniversary of the device, appropriately titled the Ediphone Jubilee of 1927. 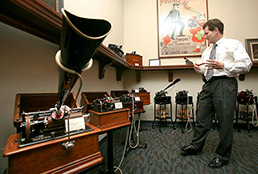 Eric von Grimmenstein, CEO of Van Ausdall & Farrar, gives a tour of the Voice Museum. “This is the root of our business,” he said. (IBJ Photo/ Perry Reichanadter)

Founded in 1914, the firm got its start when Edison selected Van Ausdall as an Ediphone distributor. Since then, the company has been proud of its association with the American icon, and now Van Ausdall & Farrar has its own in-house Voice Museum to pay homage to its history.

“This is the root of our business,” said President Eric von Grimmenstein. “The partnership Edison and Mr. Van Ausdall formed is part of the reason we are the largest independently owned office technology company in Indiana today.”

Von Grimmenstein, 55, has been fascinated with the history of audio recording for more than 20 years. He started out collecting antique radios and jukeboxes, but in the last six years has focused on finding and restoring recorded-voice artifacts—now housed at the company’s private museum.

He established the museum three years ago to provide a link between the history of audio recording technology and the company, which he owns.

MORE FROM IBJ
Click here for more photos of the Voice Museum.

Dozens of variations of Edison’s invention are arranged in chronological order along the walls, showing how the Ediphone evolved over time—from early, stand-alone machines housed in wooden cabinets with megaphone-like mouthpieces to the smaller, more streamlined examples. More modern, desktop versions of the device are on display behind glass in the center of the room, along with some of the smaller-scale artifacts such as wax cylinders.

Von Grimmenstein sees value in incorporating the museum into the business, which employs about 200 and pulled in $30 million in revenue in 2009.

“We’re a local company with a lot of history, and to a lot of people, that makes a difference,” he said.

The museum, housed in a well-lit room next to the lobby, primarily is used to educate clients and the occasional special guest about the history of audio technology—still a key component of the office automation industry.

Such private collections are not unusual at businesses of all kinds, said Elee Wood, assistant professor of museum studies at IUPUI.

“Certainly, a lot of corporations want to explore their own histories,” she said. “Chronicling the progress of their company is tied to their identity.”

The idea for the audio museum came after von Grimmenstein visited an Edison museum in Florida that celebrated the phonograph. Although the early record player was one of his most significant inventions—Edison was posthumously awarded a Grammy in 1977 for his achievement in recorded sound—he was much more interested in its business applications.

“Edison envisioned it as a business tool because he believed the biggest need for it was in the office,” said Don Gfell, a trustee of the Edison Home in Milan, Ohio.

Edison thought the device would revolutionize the workplace, and it was marketed as such. Above one of the dictating machines at the museum is a large advertisement from France claiming that notetaking by hand was ancient history, and business phonographs were the wave of the future. However, the machines were slow to catch on. It wasn’t until 1975, when the handheld audio recorder was introduced, that voice recording became common.

“People forget that from the early 1900s to about the 1960s, these machines were the only means of audio recording,” Gfell said.

Recently, Gfell and members of the Michigan Antique Phonograph Collectors buried an Ediphone cylinder as part of a time capsule along with more contemporary devices. Their hypothesis was that whoever finds the capsule in the future will be able to play only the more primitive cylinder because the other forms of technology will be incompatible.

Gfell, who has amassed Edison artifacts for more than 40 years, said the Internet has made collecting easier. Putting together museum-quality pieces in as little time as it took von Grimmenstein would have been nearly impossible just two decades ago. Instead, a collector would have to depend on word of mouth and put in some road miles. Gfell traveled across the country searching antique shops, flea markets and auctions to find one-of-a-kind artifacts.

“The hunt, as some of us collectors say, was a major thrill. You really had to be knowledgeable about the history surrounding the antique you were looking for,” Gfell said.

Technology also has improved on Edison’s idea of recorded voice. While cell phones and the Internet have had an impact on corporate communications, von Grimmenstein said many of his clients couldn’t do their jobs effectively without audio recorders.

“We do a lot of business for those in the health care industry. For example, surgeons use audio recording devices to take notes during surgery by stepping on a button on the floor,” he said. “The surgeon can then take the audio file and have it converted into text, making the process of writing medical reports far more efficient.”