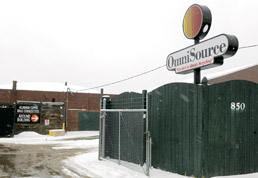 Former Marion County Prosecutor Carl Brizzi blasted metal-recycling giant OmniSource in a court filing in his last week in office, asking a judge to force the company to forfeit all five of its Indianapolis scrap yards and a foundry facility in Hendricks County.

Brizzi said in a Dec. 30 filing in Marion Superior Court that OmniSource—a subsidiary of publicly traded Fort Wayne powerhouse Steel Dynamics Inc.—buys millions of dollars worth of stolen metal per year as its “regular way of doing business” and operates in a similar fashion all over the state.

The two-term prosecutor asked Judge Michael D. Keele to appoint a receiver to take control of the company’s operations in Indiana.

“Repeated attempts by law enforcement to stop this huge and mature enterprise have been fruitless heretofore,” Brizzi alleges in the filing, a counterclaim to a suit filed by OmniSource.

“The result has been the acquisition of millions of dollars worth of contraband scrap metal stolen from the residents of Marion County and the surrounding counties.”

OmniSource parent Steel Dynamics described the filing as “preposterous and without any factual or legal merit” in a Securities and Exchange Commission filing Jan. 6.

The company says the move is part of a plan by Brizzi and Greg Garrison—a private lawyer he enlisted to help investigate OmniSource’s business practices—to “extract money” under threat of civil forfeiture.

“OmniSource is confident that the newly elected Prosecutor and his staff will want to review and re-examine Mr. Brizzi’s imprudent actions, including his decision to file this baseless counterclaim against OmniSource in the waning hours of his administration’s existence,” the company wrote in the filing.

“OmniSource trusts that the new Marion County Prosecutor, Terry Curry, will recognize the lack of merit in any of the allegations made against OmniSource and will promptly dismiss all proceedings against the company.”

Judge Keele on Jan. 10 approved a motion to replace Brizzi, a Republican, as a party in the case with Curry, the first Democrat elected to serve as Marion County prosecutor in 16 years.

Curry was mum about whether he will continue to pursue the case, declining an interview request from IBJ.

“Like many matters in this office, the OmniSource case is being reviewed at this time,” Curry said in a written statement. “We are thus not in a position to make any specific comment at this time.”

OmniSource has said in court filings it adheres to strict policies and employee training to prevent the purchase of stolen metal. And it points to its former employment of more than 50 off-duty IMPD officers to provide security and prevent theft.

OmniSource has bristled in particular at the involvement of Garrison, a Brizzi friend and local conservative talk show host. Garrison, who stands to pocket a portion of any settlement or judgment levied against the company, has repeatedly demanded a monetary settlement from OmniSource that would earn him “hundreds of thousands, if not millions, of dollars,” OmniSource said in court filings.

OmniSource also took issue with the Brizzi counterclaim—filed by Garrison—because it violates trial rules. Another attorney representing Brizzi already had filed a response to the company’s lawsuit in November. Parties in a lawsuit can’t file a new response and counterclaim without the court’s permission.

Garrison asked the judge for a belated leave to file the counterclaim in a new filing on Jan. 6.

Garrison will finish cases filed before the end of Brizzi’s term—“pursuant to his contract with Brizzi,” said Lara Beck, a spokeswoman for the Prosecutor’s Office.

Officers from the IMPD, FBI, Indiana State Police and other agencies raided the Indianapolis scrap yards operated by OmniSource in February 2009, collecting evidence and seizing property and more than $277,000. The raids were the culmination of a year-long undercover investigation.

A Marion County grand jury returned a 16-page indictment against OmniSource on Oct. 22, charging OmniSource with three counts of corrupt business influence and five counts of attempted receipt of stolen property. The indictment details dozens of allegations. OmniSource President Mark Millett said at the time the company would aggressively defend itself.

A week before the grand jury indictments, the company sued Brizzi, seeking return of the seized cash. OmniSource said the investigation was a sham intended to raise Brizzi’s political profile.

Brizzi fired back in his last week in office: “The criminal element in Marion County has provided OmniSource with a constant supply of items that they daily steal and then immediately sell to one of the defendant’s scrap yards,” Brizzi alleged in his filing. “At every location operated by the defendant in Marion County the authorized agents daily purchase thousands of dollars worth of contraband property stolen from residents of the county.”

Garrison stands to collect 20 percent to 30 percent of the take from any forfeiture from OmniSource, depending on how the case is resolved, according to his contract.

A staff member of Garrison’s law firm said Garrison was on vacation and not available for an interview.•