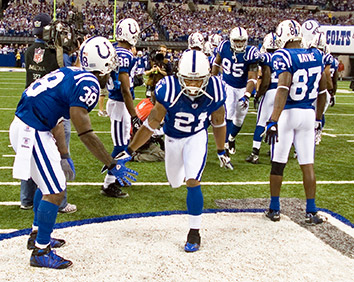 The 11th hour has arrived.

The NFL and the players' union no longer have months or weeks or days to reach a new collective bargaining agreement. If they don't get it done before Thursday turns to Friday on the East Coast, pro football's first work stoppage since 1987 is almost a certainty.

Yes, America's most popular sport could see the 2011 season jeopardized—Indianapolis' first Super Bowl along with it.

Both sides are trying again, beginning Thursday morning with a 10th day of federal mediation. Neither side is making optimistic proclamations.

Are they making progress that could lead to a settlement in a dispute that involves $9 billion in revenues?

"I never have expectations, except to have A, B, C, D and E, and to always plan for F," Indianapolis Colts owner Jimmy Irsay said. "It changes. A chessboard that moves around and things happen at unusual hours."

Including, perhaps, in the final hours before the NFL could lock out the players, or the union could decertify. An extension of the deadline is possible, too.

"We have to see where we are," said Jeff Pash, the league's chief negotiator. "We've said that's an option. We're not taking anything off the table."

The owners didn't spend too long discussing where the negotiations stand, cutting their planned two-day meeting to a three-hour affair at a suburban hotel. Patriots owner Robert Kraft and Cowboys owner Jerry Jones, both members of the labor committee — which has the authority to call for a lockout — headed home rather than stick around for further talks with the union.

"We can't comment, and even more so, we're certainly still involved in our dialogue, and so there is no comment," Jones said.

Two people with knowledge of the NFL Players Association's plans told The Associated Press the union was prepared to decertify Thursday, barring a last-minute breakthrough. That action means the union no longer would represent the players, who would be giving up their rights under labor law and instead take their chances in court under antitrust law. The people spoke on condition of anonymity because the union had not made its plans public.

There was a flurry of activity Wednesday: a four-hour mediation session attended by all 10 members of the owners' labor committee, Mawae and New Orleans Saints quarterback Drew Brees; the three-hour owners meeting at a hotel 25 miles away in Chantilly, Va.; a one-hour meeting of the league's labor committee immediately after the owners broke up; the cancellation of another planned gathering of owners Thursday; and a private visit with mediator George Cohen starting at 8 p.m. by NFL Commissioner Roger Goodell, two top league lawyers, New York Giants owner John Mara and Green Bay Packers president Mark Murphy.

Mara — the first owner to attend the nine days of mediation, on Tuesday — and Murphy left at 9:30 p.m., followed shortly by Goodell, Pash and outside counsel Bob Batterman.

Asked the purpose of the 1½-hour evening meeting with Cohen, Pash said: "To speak with the mediator and get some direction."

Irsay said the owners welcomed the opportunity to be updated on negotiations, but there was little reason for them to remain in Washington as the deadline approaches.

"We had the chance to ask questions, but we didn't break with a lockout vote or anything like that," Irsay said.

Because Cohen told both sides to stay silent publicly about the current talks, no one has revealed any specifics about what progress might have been made.

The biggest sticking point all along has been how to divide the league's revenues, including what cut team owners should get up front to help cover certain costs, such as stadium construction. Under the old deal, owners received about $1 billion off the top. They entered these negotiations seeking to add another $1 billion to that.

Among the other significant topics: a rookie wage scale; the owners' push to expand the regular season from 16 games to 18 while reducing the preseason by two games; and benefits for retired players.

Cohen said last week that the sides were far apart on the core issues.

By the end of Thursday, more will be known about exactly how far apart.

"I don't want to put any certainty on what this evening might bring or tomorrow might bring," Irsay said Wednesday. "It's really, truly hard to predict. These things change."