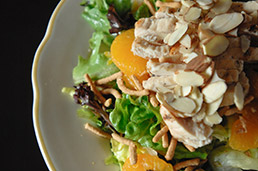 Poppy seed dressing is the mix-in of choice on Chef Mike’s salads, especially on the chicken. (IBJ Photo/ Perry Reichanadter)

Park 100 isn’t known for its original dining offerings. Nondescript office and warehouse space, yes. Local cuisine with a bit of ambition, not so much.

An exception is Chef Mike’s Charcoal Grill (7102 Woodland Drive, 295-9490). The grill doesn’t do much to alienate the grab-something-familiar-before-crashing clientele of nearby hotels, but Mike and his crew still manage to work in some interesting touches.

Entrees were less exciting—a dab of cucumber pepper relish was all that distinguished Grilled Salmon ($19.99). Not bad, just predictably OK, with standard-issue broccoli and cauliflower and relatively unseasoned roasted red potatoes. And I expected more from the Chef’s Daily Roast Half Chicken ($12.95), featuring bland fowl and the aforementioned sides. I don’t demand 11 herbs and spices, but these pieces needed something.

I kept things simpler on a return lunch visit and was glad I did. Had I removed the 6-ounce Bourbon Chive

Burger ($8.99) from its bun, it could have easily passed for an above-average meatloaf. The grill also did well by a Philly Cheese Steak Sandwich (a bit pricy at $9.25) with South Philly-style sliced rather than chopped steak and restrained use of fried onions and non-Philly green pepper. Siding the sandwiches with, respectively, Potato Salad and Red Raisin Slaw proved good choices over traditional fries. The red bliss potatoes, crunchy celery and a bit of without-warning heat helped them transcend.

Warning to first-timers: Even though you can see Chef Mike’s from 71st Street, getting to the parking lot is a little tricky. Turn north on Woodland Drive and make a wild guess as to which of the unmarked three or four driveways to pull into on the left. Eventually, you’ll pick the right one.•
__________

Third in our month long series of reviews of “en route” restaurants.