Every ticket sold at the Center for the Performing Arts in Carmel nets a $2.50 surcharge for a little-known private entity.

The money goes to the Carmel City Center Community Development Corp., a not-for-profit that has emerged as a key player in the city’s burgeoning downtown.

Also known as the 4CDC, it was formed in 2009 to take over construction of an office-theater building across from the Palladium concert hall from the city’s private development partner, Pedcor Cos., after the recession hit.

Community development corporations typically step into the role of private developer on projects that wouldn’t be feasible to a for-profit company. Unlike most CDCs in Indiana, this organization doesn’t limit its activities to specific projects.

The 4CDC last month gave the performing arts center $1 million to cover its operating expenses, and it’s expected to provide another $4.5 million through June 30. It also has given small grants to arts organizations and new businesses downtown.

“With the economy the way it is, these public-private partnerships become more important than ever,” said Mike Wells at REI Investments, which manages the office-theater building known as the James Building.

Wells has worked closely with Karl Haas, the attorney who used CDCs in redevelopment projects for downtown Indianapolis and now counsels the Carmel Redevelopment Commission.

Much of the 4CDC’s revenue comes in the form of grants from the commission, which oversees tax-increment financing districts that generated $19 million in 2010.

Yet the details about its revenue sources and grant-making activities remain private. President Richard Taylor declined to answer questions, as did Haas.

Public records show that on Nov. 1, the commission agreed to make four separate grants to the 4CDC totaling $13.3 million.

Haas explained to the commission in a special meeting that those grants would back up lines of credit, which would be used as cash reserves, to cover debt service and to free up funds for Palladium operating expenses.

The commission also agreed in June 2010 to provide the 4CDC $10 million. The reason for that grant is not clear.

The 4CDC’s real power is the flexibility it provides to the redevelopment commission in financing its various expenses.

The 4CDC is subject to the same restriction, but it has other revenue sources like the ticket surcharge. That means it can shift TIF-backed grants from the commission to cover capital projects and spend non-TIF funds on other types of expenses.

The ticket surcharge took effect July 1. But the redevelopment commission was able to generate cash much sooner. In December 2010, the commission assigned the future surcharge revenue to the 4CDC, which then used it as collateral to obtain an $8 million loan.

At the time, Haas referred to the surcharge as a “parking surcharge,” suggesting it was intended to cover the cost of the 580-space garage adjacent to the James Building.

Indy used a CDC in the early 2000s to finance a parking garage on Illinois Street that served a new Emmis Communications Corp. headquarters on Monument Circle and downtown in general. The Circle Area Community Development Corp. obtained a mortgage backed by future parking revenue, something governments aren’t allowed to do. 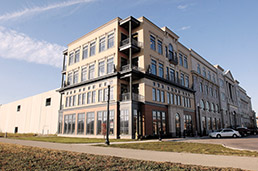 The 4CDC in press releases compares itself to those CDCs. Yet those that were backed by Indianapolis have limited roles.

The Circle Area CDC, which is controlled by a board of five mayoral appointees, hasn’t done any projects other than the Illinois Street garage, said Deron Kintner, head of the Indianapolis Bond Bank, who is also chairman of the CDC’s board.

Another Indianapolis-backed CDC rehabbed the Murat Theatre building in the 1990s. It continues to receive revenue from a ticket surcharge, which it grants to Massachusetts Avenue-area organizations for beautification in the neighborhood, said Kintner, who is chairman of that board as well.

Other CDCs in Indianapolis focus on reviving neighborhoods. While they coordinate with the Metropolitan Development Commission on specific projects, they appoint their own board members and set their own agendas.

It’s unclear how the 4CDC elects its leaders or makes decisions. The three-member board consists of Taylor; City Councilor Ron Carter, who serves as secretary; and Bruce Kimball, who serves as treasurer. It doesn’t have its own website, nor does it publish its grant-application guidelines.

4CDC to the rescue

4CDC gave the performing arts center $1 million toward its $5.5 million subsidy in October without hearing a presentation from interim CEO Frank Basile.

Basile said he and board Chairman Rollin Dick reviewed their 2011-2012 budget with Mayor James Brainard, who agreed that a $5.5 million subsidy was needed.

Brainard said he relayed that information to Haas, “and he handled it from that point.”

But Sharp said that’s the price he’s willing to pay if it means expenses like the performing arts center’s subsidy don’t have to come from the city’s general fund.

“What are the lesser of evils in dealing with this problem? And that’s where I think we’re at,” Sharp said.

The 4CDC has stepped up in smaller ways.

In 2010, it created an $85,000 grant fund to help new businesses downtown finish out their leased spaces. Last spring, after the Carmel City Council cut its annual grants to arts organizations, the 4CDC filled the gap.

Gregory Hancock of the not-for-profit Gregory Hancock Dance Theatre said he was concerned about how he was going to make up the funding, which covered general operations.

Then he received an e-mail telling him to direct his letter of request to the 4CDC. The grant he received was “substantial,” though he couldn’t recall the exact amount. Hancock said he hasn’t heard whether the money will be available again next year.

Katherine Dill, executive director of the Carmel Clay Historical Society, received $31,000 in a similar fashion. A staff member at the Carmel Arts and Design District, a project of the redevelopment commission, told her there was a grant opportunity with the 4CDC.

“They just said ‘arts and arts programs’,” she said. “It was very general.”

The museum, which is off the Monon Trail, is rehabbing its exhibit space in time for the 175th anniversary of Carmel in 2012

Wells, whose firm built the Emmis headquarters, thinks the 4CDC is like any other community development corporation.

“It’s a twist on what’s been done before,” he said. “It’s just a different environment, different community.”•