It would be difficult to find three art shows more different from one another than the trio that opened recently at the Indianapolis Museum of Art.

In one, contemporary fantasies are brought to life in fanciful, colorful photography and installations. In the second, elemental blacks, whites and grays are the defining colors in works that celebrate the brush stroke rather than the subject. In the third, pieces that could be all about practicality and ceremony transcend.

Let’s start with “Out of This World,” featuring the work of Indianapolis-based Brian McCutcheon and housed in the McCormack Forefront Galleries.

McCutcheon’s muse is the space program, but he seems just as interested in how childhood fantasies linger in more practical adults. In his odd but relatable world, the sculptural pieces are the most successful, particularly “Flight,” which actually begins a floor down in the museum lobby. From there, flexible aluminum tubing makes manifest the flight trajectory of a small rocket. 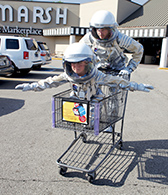 But the trail is likely to take on a different meaning for each visitor. To me, it hinted at a signature, at randomness, at a life’s path and at an uncoiled Slinky, all at the same time. Credit the IMA powers-that-be for allowing the piece to leave the confines of the gallery space.

McCutcheon’s “Capsule” puts a lawn chair inside a space capsule, fueling questions of how our fantasies can exist with reality. In “Phoom! Crack! Kapow! Eeehaa!,” a boy in oversized men’s clothing echoes the boy-within-the-man themes of the rest of the show. And in “Splashdown,” a

lawn chair surrounded by downed balloons can be read as a successful fantasy completed or one that never got off the ground. (And you are excused for thinking about the Pixar movie “Up!”)

McCutcheon’s photography and video work are less consistent than his installations. His distorted face shots seem more like a Facebook experiment—and distract from other pieces in the gallery. But a set of space-suited father-and-son shots—in a car, in a shopping cart, etc.—are evocative, funny and oddly beautiful.
__________

With some artists, repetition of theme can trivialize the individual work as it becomes lost in a sea of sameness. The IMA seems to understand that Yusaku’s work strengthens when the small pieces are brought together. And so we have 77 works, most no bigger than a few inches high, in which the essence of language is broken down into deceptively simply black and gray strokes.

Some go beyond even the language, with the primordial “Himatsu” (“Splash”) offering a row of nine geysers without context. This could be the beginning of the world or a fountain of exploding pens.

But the impact, for me, was collective rather than individual. Just as Yusaku’s repeated brush strokes strengthen the whole in an individual piece, so, too, does the sheer volume of work on display here strengthen the experience of each piece.
__________

The big new show at the IMA (and the one of these that requires an admission fee), is “Art of the American Indians; The Thaw Collection” (through April 1). A touring exhibition rather than an IMA-created one, it brings in more than 100 pieces from one of the most significant collections of Native American work, organized by the Fenimore Art Museum in Cooperstown, N.Y.

Laid out by region, it’s got pottery, ceremonial masks, jewelry, woven baskets, woodwork and clothing—all the things that would make up a good sampler show. But the deeply beautiful, intricately crafted items here both embody and transcend their cultural contexts. Even the nameless pieces feel like the work of deliberate, visionary artists. 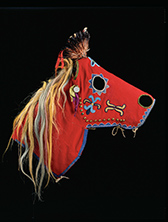 I found myself most drawn to the work in the California and the Great Basin section, home to Scees Bryant Possock’s remarkable basket “The Ferns.”

Tightly coiled, boldly colored and gracefully symmetrical, it subtly evokes the natural world and our ability to manipulate it in respectful ways.

If you plan to visit the IMA for the show, don’t overlook the ancillary events. Film screenings and lectures, some in cooperation with the Eiteljorg Museum of American Indians and Western Art, have been programmed to expand the experience.•