Unlike past attempts at transforming the vacant site, the city will control a key parcel—a parking lot at 302 E. Washington St. Combined with the arena site, the potential development area is more than 5-1/2 acres, which makes it the largest remaining site within the Mile Square.

“We receive more and more interest from developers as the months go by,” Deputy Mayor Michael Huber said. “It’s possible that a solicitation could go out sometime in 2012.”

The Circle Area CDC is a private not-for-profit, but it exists to carry out City Hall’s vision for downtown development. More than a decade ago, the CDC financed construction of the Illinois Street parking garage that serves the Emmis Communications Corp. headquarters on Monument Circle. As a private entity, the CDC was able to build the garage with a mortgage backed by future parking revenue.

Circle Area CDC pursued a similar strategy in buying the Washington Street parking lot, said Deron Kintner, chairman of the CDC and director of the Indianapolis Bond Bank. Kintner and the four other board members are appointed by the mayor.

Developers have told city officials they needed the parking lot to be able to accommodate a large retailer, Kintner said. The Market Square Arena site alone wouldn’t work because it’s split in half by Market Street. Eliminating an alley that separates the southern half of the arena site from the parking lot would create nearly four contiguous acres.

That’s the amount of land needed to include a large store, such as Target, in a high-density, mixed-use project, said Alig, who was part of a group that pitched exactly such a project in 2007 to former Mayor Bart Peterson.

Peterson had requested the proposals after a first developer’s plans fell through. The developer, who wanted to build condos, failed to make enough pre-sales to start construction. 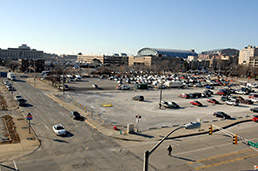 The city now controls both parcels in this block, seen from New Jersey and Market streets. The back parcel, across the alley, is the 302 E. Washington St. parking lot. (IBJ File Photo)

Peterson put off making a decision on the second-round proposals until after the 2007 election, which he lost to Ballard.

The 258-space parking lot is likely to be a Super Bowl gold mine. Operator Denison Parking is marketing it as an RV tailgating site for $495, and a portion of that revenue will go to the CDC as the owner.

Given the depressed real estate market, Alig said he wasn’t sure what type of retail might be attracted to Market Square now.

“I think just everything’s on hold, although downtown Indianapolis seems to be doing well because it’s got a strong hospitality component,” he said.

Mike Wells, president of REI Investments Inc., said plans unveiled Jan. 24 by Flaherty & Collins Properties to build a mixed-use project anchored by a Marsh grocery store on the northwest side of downtown are a positive sign.


“You can tell the momentum is building for the downtown,” he said. “The city will have another shovel-ready site in Market Square.”

Market Square is not necessarily next on the list, Huber said.

Ballard’s administration is juggling a number of projects, the most imminent of which is redevelopment of the former Massachusetts Avenue fire station.

Other opportunities could arise, Huber said, and the city would have to act quickly, as it did with the Flaherty & Collins project. Much of the land that will be used is surface parking for OneAmerica Financial Partners employees, so the city agreed to make up the lost spaces by building a $13 million parking garage.

“When someone else owns the property, deals take on a different character,” Huber said.

The Washington Street parking lot was a “speculative” purchase, Kintner said, which is why it made more sense for the CDC than the city.

If redevelopment stalls, the CDC will refinance its five-year loan from Louisville-based Stock Yards Bank & Trust, which was based on an estimated $360,000 a year in parking revenue, he said.

Although the lot was last assessed for tax purposes at $2.2 million, Kintner said the bank’s appraisal of $4.4 million justifies the purchase price. (The lot, just east of the City-County Building, serves mostly daily parkers.)

The loan covered 80 percent of the purchase price, and Indianapolis Downtown Inc. supplied a $1 million down payment as a secondary lender.

IDI, which promotes downtown, has just a $3 million budget but had $8 million in an investment reserve at year-end.

The group used the reserves as collateral for a $1 million loan, then lent the money to Circle Area CDC at a higher interest rate of 7 percent.

IDI has a close relationship with the Indianapolis Bond Bank, which supplied $600,000 of its budget last year.

That money, which came from the city’s downtown tax-increment financing district, was not for a specific service or program, said Julia Watson, vice president of marketing and communications.

“We believe we elevate the product so the TIF district is more successful,” she said.•