Media day has long been a major attraction at the Super Bowl, and this year for the first time, fans—many from the Indianapolis area—are being allowed to experience the carnival atmosphere first-hand.

NFL officials decided earlier this season to charge fans $25 to attend media day at Lucas Oil Stadium on Tuesday. Not surprisingly, the ticket is one of the hottest on this year’s Super Bowl events schedule, selling out within days of going on sale. Buyers were paying more than $350 on the secondary market.

“We have twin objectives for media day: ensure the media can get their job done and … bring fans closer to the game and players in a unique setting,” said NFL spokesman Brian McCarthy.

McCarthy said the crowd was capped so fans “could have the best experience and be close to the field.” 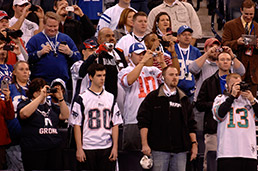 Audience members were not allowed to get on the field or talk or otherwise interact with the players or the media. Reporters also were forbidden from going into the stands to interview fans.

Fans were given radios with six channels to hear comments from the most prominent players and coaches. Attendees also were able to tune into the NFL Network’s coverage of the event on their radios. The stadium's large video monitors were streaming footage from six podiums at one time, and fans had the option of tuning into whichever of those players they liked.

The crowd let out big roars when New England Patriots quarterback Tom Brady talked about Peyton Manning, Dwight Freeney and memories of the rivalry games in Lucas Oil Stadium with the Indianapolis Colts.

The biggest cheer came when Eli Manning took the field to answer questions. It took less than 10 minutes for the first question about his big brother.

“Peyton was a big influence on my life and my football career,” Eli Manning said. “He’s been teaching me about the game ever since I was little, and that hasn’t stopped to this day. We talk all the time, and he still offers me a lot of advice.”

Ticket revenue from media day is expected to generate about $182,500, a small sum compared to the approximately $68 million Sunday’s game will earn the league but the NFL is eager to wring every dollar out of the event given Lucas Oil Stadium’s relatively small size.

McCarthy said the proceeds from tickets and concession sales will be distributed equally to the league’s 32 owners. As part of the city bid to host the Super Bowl, the NFL is not required to pay to rent the stadium for the game or ancillary activities such as media day.

NFL officials will evaluate the new fan-friendly format to determine whether to sell tickets again at in New Orleans next year or the 2014 Super Bowl in New York, McCarthy said.