This week, thoughts on the Indianapolis Art Center’s “Art from the Heartland” show, Mike Birbiglia’s appearance at Clowes Hall, and moonlighting by the “Avenue Q” puppets.

By design, the biennial “Art from the Heartland” features multiple visions filtered through a single eye. The eye this time belongs to lone jurist Paula Kataz, director and curator of the Herron Galleries at the Herron School of Art and Design, who seems focused on the big and the bold.

The Indianapolis Art Center exhibition (running through June 10) is filled with striking images. Patrick Earl Hammie’s harrowing “Night Watch” could inspire many a writing class to construct a narrative around it—yet the story behind the almost feral nude urgently cradling the head of an unconscious (or dead?) companion may be most dramatically left to the painter.

Khara Koffer’s “We All Have Our Something” sadly and hauntingly creates the impression of flowers (made from playing cards) dropped from the ceiling into a haphazard pile. Memories? Hopes? Fate? You make the call. 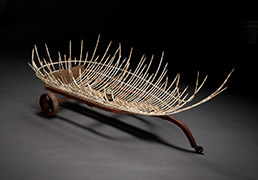 There’s a melancholy, too, to Sandra Heard’s perhaps-too-explicitly-titled “The Dreamer Who Never Set Sail,” in which the ribs of a never-finished boat sit on a rusty trailer. For relief from the gloom, James Wille Faust’s colorful geometrics include the irresistible, three-dimensional “White Butterfly.”

Do I have opinions on more of the pieces? Of course, but I’ll admit I’m a bit intimidated by the cross-armed subject of Frank Oriti’s “Danny II,” 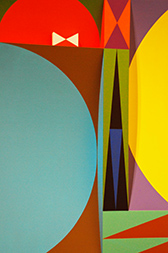 staring down from his canvas daring judgment as the neighborhood behind him fades to whiteness.

One of the many remarkable things about Mike Birbiglia’s performance at Clowes Hall April 28 is how smoothly he transitioned from stand-up into his one-man play “My Girlfriend’s Boyfriend.”

Granted, the play is rooted in stand-up—and it’s largely comedic—but I still was in awe of how he served as his own warm-up act, earning the good will of the crowd by heckling the hall and telling local stories. (His frequent appearances on “The Bob and Tom Show” make him almost an honorary local.) He then eased into a different rhythm for the more structured bulk of the evening. 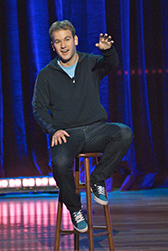 The big laughs earned throughout might mask how beautifully written the piece is and how genuinely it searched for human truth. Traditionally, much of stand-up is built on exaggeration, and there are plenty of opportunities within “My Girlfriend’s Boyfriend” for Birbiglia to have scored even bigger laughs by taking the incidents further.

But bigger laughs don’t seem to be his top priority here, and that adds to the impact of the evening.

With inspired synergy, the puppets and their handlers from the Phoenix Theatre’s “Avenue Q” trekked over to the ComedySportz theater for an evening of “Puppet Prov” on April 29. The result was joyously silly, giving “Q” fans an opportunity to spend more time with the characters that prove so endearing in their own show. For their part, the ComedySportz hosts proved to be formidable opponents in this game that doesn’t matter.

And even if many of the tossed-off lines were lost amid the laughter, the joy of the performers accented their talents. The evening was doubly successful in making me want to see both “Avenue Q” and ComedySportz again. Alas, the former is only around through May 13.•