The city and a neighborhood development group have agreed to seek historic protection for a four-acre industrial complex they hope will be a catalyst for redevelopment of a stretch of East Washington Street.

The centerpiece of the P.R. Mallory complex at Washington and Gray streets is a three-story, 125,000-square-foot brick structure that’s been vacant for decades. The building and four smaller structures on the site are owned by Southeast Neighborhood Development, a not-for-profit that’s working with the city to convert the complex from an eyesore into a magnet for neighborhood jobs.

SEND, the city and state historic preservation officials recently signed a memorandum of agreement to seek protection for the structures by placing them under the jurisdiction of the Indianapolis Historic Preservation Commission and by nominating them to the National Register of Historic Places.

It could take as long as three years to put the historic protections in place, but SEND and its partners aren’t waiting that long to promote redevelopment of the site. 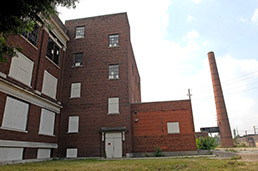 Efforts are under way to redevelop the former headquarters of battery-maker P.R. Mallory. (IBJ Photo/Perry Reichanadter)

Julie Beaubien, SEND’s interim executive director, said her group is working toward issuing a request for proposals late this summer or early fall to find a developer or developers interesting in rehabilitating the main Mallory Building.

“The Mallory building is a major redevelopment challenge and opportunity,” said Mark Dollase, vice president of preservation services for Indiana Landmarks, which has been advising SEND on the project. The building could be used as office or light industrial space or could accommodate apartments.

SEND and the city have been working on acquiring the various Mallory properties over the last three years.

Other structures on the site that would be protected by IHPC are a small power house, the Mallory employee cafeteria building, a gatehouse and a smokestack that is a landmark in the neighborhood.

The property also includes undeveloped land that abuts Washington Street. That site was cleared last year by SEND and the city using federal grant money to demolish a former dry cleaner and clean up contamination of the site. Another building within the boundaries of the proposed historic district will be demolished soon because it is considered too deteriorated to save.

Immediately south of the proposed historic district is a city-owned, 60,000-square-foot building that could have a tenant soon. Beaubien said her group is negotiating with a company interested in occupying it and bringing jobs to the neighborhood. She wouldn’t identify the potential tenant.

At the beginning of the 20th century, the Mallory site hosted baseball fields where the Indianapolis Indians played their first games. It was later the site of Wonderland, an amusement park that was destroyed by fire in 1911.

Employment began to decline in the 1970s as Mallory sold off various business units. All that remains is CMW Inc., which bought Mallory’s electrical-contact manufacturing operation in 1978. CMW, which also produces high-density metals and welding products, employs about 110 people in buildings that were formerly part of the Mallory complex. Those buildings are south of the proposed historic district and are not part of the redevelopment effort.