Some of central Indiana’s largest public companies turned in fantastic performances in 2011, while others suffered.

Allison Transmission tripled its profit in 2011, which may have helped revive the initial public offering that raised $600 million in March. 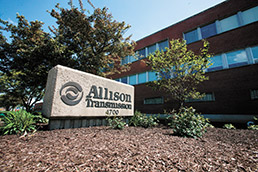 Allison Transmission profit tripled in 2011, thanks to the trucking industry undergoing a resurgence.(IBJ file photo)

Allison is the world leader in automatic transmissions for commercial trucks, and it dominates the work truck segment that includes school buses and firetrucks.

Allison hoped to launch an IPO, rumored to be worth $750 million, early in 2011, when investors seemed attracted to a rebounding auto industry. But the year passed without the shares hitting the market.

Allison finally debuted on the New York Stock Exchange in March this year. Although analysts were lukewarm to the offering, the company raised more than it had anticipated in a revised prospectus. Most of the $600 million will go to pay back private-equity owners Onex and Carlyle Group.

The firms bought Allison from General Motors in 2007 for $5.6 billion.

Increasing smartphone use by consumers around the world helped drive BrightPoint’s revenue up 46 percent, to $5.2 billion.

Profits for the year were $48.8 million.

A leading logistics-services provider for the wireless industry, BrightPoint has shifted more of its business to distribution, which means buying phones from manufacturers such as Nokia, Samsung and Research in Motion and reselling them in smaller batches. Smartphones raise the average selling price and push more revenue through BrightPoint’s distribution business.

Meanwhile, the Indianapolis-based company’s logistics services continue to provide a higher profit margin. BrightPoint has expanded that side of the business with the purchase of a recycling or “reverse-logistics” company, Touchstone Wireless. In 2011, BrightPoint relocated Touchstone from Bristol, Tenn., and consolidated the operation into existing facilities in Plainfield and Fort Worth, Texas. The move cost BrightPoint $5.2 million in restructuring charges.

Also in 2011, BrightPoint invested $13 million in Intcomex, a move that will extend its reach in Latin America.

BrightPoint anticipated a soft start to 2012 for the wireless industry. In addition, the company learned early this year that it would lose a big logistics customer, Cricket Communications, in April. The firm represented 6.8 million, or 8 percent, of all devices that BrightPoint’s logistics division handled last year.

Cummins topped off its already-strong growth with a resurgence in the North American trucking market. 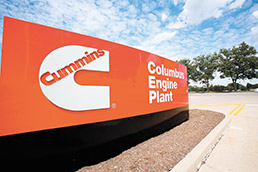 The Columbus-based diesel engine maker’s annual revenue rose 36 percent, to $18 billion, and it saw a profit of $1.8 billion.

Earnings per share rose 81 percent, to $9.55. Cummins gave investors reason to stick around long term by raising its dividend 40 cents, or 52 percent. The full-year dividend was $1.325 per share.

The North American trucking recovery made up for a second-half slowdown in emerging markets, especially India and China, Cummins said. Cummins expects the North American market to stay strong in 2012, but the global economy will also be a factor, as 59 percent of revenue last year came from outside the United States.

Despite flat revenue growth for the year, Carmel-based CNO Financial cranked out a 34-percent increase in profit.

The company also shored up its debt-to-capital ratio and reported that the statutory risk-based capital ratio of its insurance subsidiaries rose 26 percent.

The company formerly known as Conseco also had a change at the top, with the September retirement of CEO Jim Prieur.

The former No. 2 executive at Toronto-based Sun Life Financial came to CNO five years earlier to rescue CNO from problems that mounted during its fast growth in the ’80s and ’90s, which lingered even after a 2003 bankruptcy restructuring.

Prieur passed the baton to Ed Bonach, who had been CNO’s chief financial officer. Even with solid profit growth last year, shares of CNO closed the year down about 12 percent.

Revenue peaked and profit began to fall last year as Eli Lilly and Co. plunged into a devastating string of patent expirations.

Lilly stands to lose more than $9 billion in annual revenue from those drugs as well as three other best sellers: the cancer drug Gemzar, the osteoporosis drug Evista and the insulin drug Humalog.

The partners see the fragmented $1 billion specialty running market as ripe for a national-branded player. Their plan calls for additional stores and a comprehensive running retail and advice offering at Run.com.

The homegrown home-appliance and electronics chain continued its rapid expansion in 2011, adding more than three dozen stores, including 16 in the Chicago area and 10 in South Florida.

But investors sent HHGregg Inc. shares reeling over concerns about smaller margins on slower-selling flat-panel TVs and competition from the likes of Amazon.com and Walmart. The shares finished the year at about $14, down from roughly $20 at the year’s beginning.

HHGregg executives weren’t deterred. The company bought back thousands of its cheaper shares, launched a new website, and took market share in appliances, where margins were more stable.

The company planned to add about 25 stores in fiscal 2013, including its first in St. Louis and Milwaukee, along with more stores in the Chicago area. 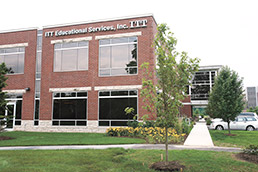 ITT Educational Services Inc. suffered a big drop-off in profit as the wave of recession-displaced students continued to recede and federal scrutiny into student lending and recruitment practices slowed enrollment across the entire for-profit college sector.

However, the Carmel-based company used its own money and other private-lending options to keep signing up large numbers of students.

ITT Educational also held its already-high tuition steady so as not to scare off potential students with ever-higher debt loads. Even so, ITT preserved a profit margin above 20 percent.

Used cars have been in tight supply since 2008, with the downturn in the economy. Fewer people traded in their old vehicle for a new one.

In all, it was a “very difficult environment,” KAR’s chief executive officer, James Hallett, told analysts.

That was before Republic, in 2009, bought Denver-based Frontier, its first scheduled airline.

Republic spent 2011 trying to make Frontier profitable. Among $120 million in cost-cutting were reductions in employee pay and slashing 40 percent of Frontier’s operations in Milwaukee.

Republic also said it planned to spin off all or part of Frontier.

So far, there are no takers. One turnoff is that Frontier faces stiff competition from United Airlines and Southwest Airlines.

As Republic makes headway fixing Frontier, its traditional, regional flying business gets tougher. Major airlines for which it flies smaller planes have merged and are paring routes. 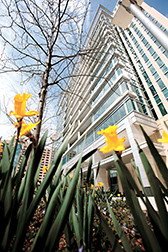 Simon Property Group Inc. saw its shares rise about 25 percent in 2011, as the world’s largest real estate company locked down its CEO with a massive retention bonus, focused development efforts on outlet malls, and laid the groundwork for a couple of big deals in early 2012.

The new contract with CEO David Simon aims to keep the son of co-founder Melvin Simon at the company’s helm through 2019. Simon, the CEO since 1995, picked up shares worth $120 million in exchange for his commitment to stay. The shares are scheduled to vest over six years.

And in November 2011, Simon sued the state of Indiana to force the collection of sales taxes on purchases made at Amazon.com. Two months later, Amazon agreed to begin collecting the taxes in 2014.

In March 2012, Simon paid $2 billion for a 29-percent stake in the French mall giant Klepierre and $1.5 billion to buy out a joint-venture partner in The Mills mall portfolio.

Profit dipped at WellPoint Inc. even as Americans’ slower use of health care provided the health insurance giant with an unexpected boost.

But offsetting those gains at the Indianapolis-based company were high unemployment, new provisions from the 2010 health reform law, and more employers choosing to insure themselves and hire WellPoint merely to administer their health plan.

The company also suffered losses in its Medicare business that led to the firing of the chief of that unit in early 2012. Because WellPoint expects Medicare enrollment to grow faster than employer health plans in the future, the company spent a reported $800 million to acquire California-based CareMore Group, which provides care and insurance coverage for seniors.