A 1927 retail building a few blocks north of Massachusetts Avenue is poised for revival after sitting empty more than 30 years.

Teagen Development Inc. has a purchase agreement for the 6,600-square-foot building at 1101 N. College Ave., rescuing it from an attempt—since withdrawn—to demolish the structure.

John Thompson, who has owned the property since 2005, applied to the Indianapolis Historic Preservation Commission in August for permission to raze the building, the roof of which caved in within the last 18 months.

IHPC has jurisdiction over and typically frowns upon the demolition of buildings that fall within the city’s designated historic districts. The building at 11th and College is in the northeast corner of the Chatham Arch historic district and is just south of the Old Northside historic district. 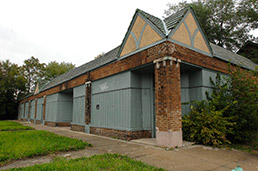 The building at 11th and College has seven storefronts and originally housed a grocery, barbershop, shoe repair business and laundry. (IBJ Photo/Perry Reichanadter)

Thompson withdrew the request to demolish when Teagen principal Larry Jones stepped forward to buy the building. Jones said he has agreed to pay “in the mid-five figures.”

Jones is no stranger to successful infill retail projects in urban neighborhoods. His company developed the Chatham Center, a building at Ninth and East streets with 9,100 square feet of retail space and 11 apartments. He also developed Lincoln Park Shops at 25th Street and Central Avenue and is a partner in the entity that bought and improved the Murphy Art Center, a 44,000-square-foot building at 1043 Virginia Ave. in Fountain Square.

The building at 11th and College has seven storefronts and originally housed the Great A&P Tea Co., a barbershop, a shoe repair business and a laundry. Over the years, it also housed restaurants and a delicatessen.

Jones anticipates leasing to three to five tenants and charging about $14 a square foot, less than the $19 he charges at Chatham Center about four blocks away. The lower rent is an acknowledgement that the property, immediately south of an interstate overpass, isn’t one that will benefit from pedestrian traffic.

“I’ve got to keep the rents down to attract tenants who will attract people to that corner,” Jones said. He noted the corner has good vehicular access from 11th and College.

A fresh produce and specialty foods retailer is Jones’ top choice for the space, but he thinks it could have appeal for small office users or service providers, such as a quick-shipping office.

Jones has a couple of hurdles to clear before executing the purchase. Though the property is zoned for commercial use, it doesn’t have dedicated parking. He’s had preliminary discussions with the city about allowing parking on a dead-end spur of 11th Street that extends east from College.

Because the building once housed a laundry, he’s also awaiting the results of environmental testing being conducted by Alt & Witzig Engineering Inc. to find out the extent of any clean-up that could be necessary.

Provided the parking and environmental issues are resolved, Jones anticipates restoring the building façade and keeping the distinctive green roof tiles. The back of the building would be rebuilt within the existing footprint. Blackline Studio, a local architecture firm, is drawing up plans.

Donna Hovey, a retail broker with the local office of CBRE, thinks the project will succeed if Jones can finalize the deal.

“He did a superb job on the Chatham Center project,” said Hovey. Jones has been successful, she said, because he knows the neighborhoods he works in and doesn’t get greedy with his rates.

She said the price point will compare well to some spaces on nearby Massachusetts Avenue that are asking $25 a square foot.

Besides benefitting from the nearby historic neighborhoods, the project could take advantage of its location just a few blocks east of the south end of the Monon Trail, Hovey said.