A trademark-infringement case brought against App Press LLC threatens to smother the tech startup in legal fees before it reaches its potential.

And in a curious twist, the case also has generated grumblings in the tightknit developer community toward a big local law firm that is representing App Press’ opponent in the federal court case. 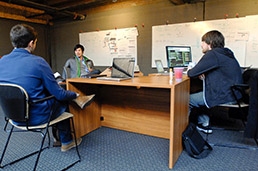 Grant Glas (left), Minh Nguyen and Kevin Smith did some brainstorming about App Press this month at the Speak Easy, a tech hangout in Broad Ripple. (IBJ photo/Perry Reichanadter)

App Press was founded two years ago by 20-something wunderkinds Grant Glas and Kevin Smith. The duo’s software, accessed by customers over its website, allows graphic designers to create an app for mobile devices even if they don’t know how to write software code.

The product appears to have hit the bull’s-eye, based on reviews in such trade journals as PC Mag.com and the magazine of the Society of Publications Designers.

App Press has more than 100 recurring customers as far away as Australia. Also notable is that it has drawn a financial and advisory interest from Minh Nguyen, who—with Napster founder Sean Parker—created online address book and social media site Plaxo. Communication giant Comcast bought Plaxo in 2008.

Legal battles “can crush a company,” said Nguyen, now CEO of the software firm Syllabuster, who came to town to help Glas and Smith refine their product.

“To have all that taken away just because of some legal mumbo jumbo … Dude, it’s like taking away the name of your baby,” Nguyen said.

The potentially expensive legal battle began last year. That’s when Apress’ lawyers in Boston sent App Press a letter alleging the Indianapolis firm was trying to play off the trademarked Apress name recognition to appeal to designers and developers, “the very customers for our client’s goods and services.”

Apress used to be known as Author’s Press and describes itself as the “leading publisher” in programming resources for the iPhone, iPad and Android markets. Its customers use its publication to do such things as app coding.

The legal wrangling continued. An attorney for Apress responded to Cox that the fact that App Press is two words rather than one and is spelled differently is irrelevant from a trademark standpoint “because when the marks are pronounced in the normal course of conversation, they are likely to sound the same.”

With persistent cease-and-desist requests by Apress, App Press last May filed a complaint for declaratory relief in U.S. District Court for the Southern District of Indiana.

“Based on Apress Media’s recent conduct, App Press is faced with the choice of abandoning its right to use the registered trademark App Press or being sued for liability and damages regarding such use,” Cox said in the court filing.

Then, last July, Barnes & Thornburg entered the picture. It took on the case on behalf of Apress, filing a counterclaim and reasserting its claims App Press was guilty of trademark infringement.

“There is a risk that consumers and authors may mistakenly associate content published by App Press—lacking any meaningful content review or quality control—with Apress, thereby harming Apress’ reputation as a publisher of high-quality works,” an attorney for Barnes and Thornburg wrote.

The case is still pending. But word that Barnes & Thornburg was working against a local tech firm have circulated among developers, including those at Developer Town.

“I’m a big supporter of Grant and everything he’s doing,” said Michael Coffey, a partner at Developer Town. “The smart choice would be to back out of the case,” Coffey said of Barnes & Thornburg. If not, “it would lose a lot of credibility.”

He added that rival law firm Ice Miller would be happy to expand its services to the local tech community, which he calls “a very, very tight community.”

The law firm, in a statement, said it is reticent to discuss client matters publicly.

“Unfortunately, businesses can find that their interests conflict and sometimes this leads to disputes. When one of our clients is involved in a dispute, it’s our job to represent them,” said B&T.

“Our firm proudly supports the Indianapolis technology community. We have a long history of promoting a vigorous and healthy climate for all business and entrepreneurial activity in Indiana and beyond, and we will continue to do so in the future.”

Business is business, but the legal dispute has turned out to be a distraction for App Press.

“We took all the necessary steps,” Glas said of Apress’ challenge, noting that his firm successfully filed for and obtained a trademark.

He’s trying to look at the positive side, interpreting Apress’ challenge as a validation of sorts of App Press’ growing presence in the market.

Nguyen said Glas and Smith have been on the right track.

“They’ve done everything. They put in all the right tools. They’re collecting data from the users. To see that execution transfer into exponential growth and make money has been fascinating,” said Nguyen, who in recent years has coached about 10 companies.

Not only that, he tells the App Press team, “You guys haven’t [even] done any marketing.”

Such talk from a Silicon Valley rock star is affirming to Glas, who met Nguyen earlier this year at Distilled Intelligence, an event hosted in Washington, D.C.

After Glas’ pitch, App Press placed in the top 10.

At a cocktail party that followed, Nguyen, whom Glas didn’t know, approached him and told Glas he liked the company’s business model.

Later, “a reporter said, ‘Do you know who you were talking with?’” Glas recalled. “I went back up to him.”

Nguyen has been helping the firm refine its product offering as well as inspiring the duo to think big about the possibilities of growth.

“We’ve been here at least 13, 14 hours a day,” Nguyen said of his recent visit to Indianapolis.

“The development community here is pretty deep. I just didn’t know how deep,” he said. “Indiana has lots of startups. It’s a nice surprise, really.”

As for how this whole legal battle with Apress will turn out, at the least it will provide a good life lesson, said Developer Town’s Coffey.

Coffey was involved in a company that found itself in a battle against Connecticut-based United Technologies Corp., whose holdings include the locally based Carrier brand of HVAC systems. After his company created a product for UTC, the corporate giant insisted on partial rights to it.

It was a costly distraction, but his company eventually won its fight.

“Do we crowd-fund a legal defense?” Nguyen thinks, openly, back at the loft in Broad Ripple.

Like a protective uncle, he advises the local tech community to “band together and try to help these guys.”•