If imitation is truly the sincerest form of flattery, then Indy stages have been covered with some serious sweet talk of late.

Returning from out of town on a recent Saturday, I found “Jersey Boys,” telling the story of The Four Seasons, still playing at the Murat. Pike Performing Arts Center was offering an Elvis tribute concert. Kurt Elling was playing the music of the Brill Building song masters at the Cabaret. And the Palladium was featuring The Fab Faux, a tribute to the Beatles. 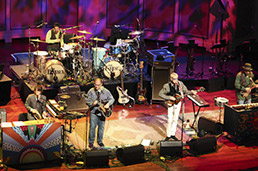 Back when I used to use a fake I.D. to see Backstreets, a Springsteen cover band, at a Jersey shore club, I thought I understood the appeal of once-removed acts: When you know you aren’t going to see the original, you take what you can get. And if you love the songs and squint your eyes, you can get a reasonable facsimile of the real thing.

I’ve since learned that their appeal—and range—is more complicated than that. And in the case of The Fab Faux, which I ultimately chose that night, much more interesting than immitative.

Its moniker might imply mop-top wigs and Nehru jackets, but The Fab Faux focuses on the music, not the appearance. Frontmen Will Lee and Frank Agnello look more like Lewis Black and Iggy Pop than Lennon and McCartney. Nobody’s “playing” Ringo. There’s no film footage of peace, love and Vietnam protest. And the band consists of five players, not four.

From the opening strains of “Back in the U.S.S.R.”—complete with airplane sound effects—to the closing “Hey Jude” sing-a-long, The Fab Faux manages something remarkable, making us enjoy and reappreciate the Beatles catalog without trying to reinvent it or impersonate the talent that created it. These are expert musicians but not cold, dispassionate ones. Playfulness goes with the near-perfection showcasing a combination of respect, talent and joy unlike anything I’ve seen in a cover band.

To be sure, it took the Palladium crowd a little while to warm up to the concept—and for some sound glitches to be worked out. But Lee (familiar to insomniacs as the bassist for David Letterman’s house band) and company demonstrated the kind of confidence that comes from playing together for 15 years—more than double the duration of the Fab Four.

(One of the five was a sub, Jim Boggia, who seemed to channel Jim Morrison’s look and Mick Jagger’s moves in a bring-down-the-house rendition of “Oh, Darling.”)

Very quickly, the band convinced the crowd to go along for the ride, tossing off any worry about whether their favorite Beatles tunes were going to be on the play list. So, while we didn’t hear “Twist and Shout,” we did get “Being for the Benefit of Mr. Kite.” The reprise of “Sgt. Pepper’s Lonely Hearts Club Band” stood in for the primary. And how many other Beatles’ tribute bands are going to play “Anna (Go to Him)”?

In a world where just about any song ever recorded is nearly instantly accessible from our desktops, The Fab Faux boldly made a case for the Beatles tunes as live music. By honoring the music instead of trying to put their own stamp on it, each player nonetheless shined. And I left with a newfound appreciation for music that I thought had nothing new to offer.•