The architecture of Michael Graves is controversial. Some dismiss his work for its post-modern and overly decorative qualities.

Others like his work for its abstraction of the classical language. Many like his use of color and his playful forms.

However you feel about this Broad Ripple High School graduate, do yourself a favor and listen to him speak at the Indianapolis Museum of Art the evening of March 28. We may all learn more about the expanding role of the architect.

Graves has elevated the architect’s image and the talents an architect can bring to a community, project and piece of furniture, and in a whimsical way, a tea kettle.

His most important influence on American culture, and indeed on my own work, stems from his early architecture as a member of the New York Five as well as from his graphic design, furniture design and product design.

As a member of the New York Five group of architects, his methodology revolved around pure architectural form over function or social concerns. The association and the book “Five Architects: Eisenman, Graves, Gwathmey, Hejduk, Meier” provided the groundwork for his later rock-star successes, such as the Portland Building in Oregon, his resorts for Disney in Orlando, and the Denver Public Library. 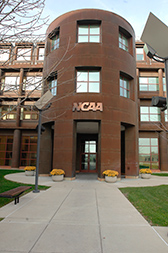 His early work during the New York Five movement included the Hanselmann and Snyderman houses in Fort Wayne—residences I visited and admired for their stark modernism and well-conceived floor plans. In all of his designs, the floor plans are carefully considered and involve the marriage of simple shapes, procession, drama and hierarchy. These plans—works of art in themselves—gently incorporate movement with function and graphically read as an assemblage of parts.

His graphic design pursuits include branding and packaging for Black & Decker, Wolfgang Puck and Crescent Paper. I particularly enjoyed his furniture designs for SunarHauserman. At The Merchandise Mart in Chicago, he designed the showroom for these pieces with architectural vignettes to enhance the visitor experience. He also designed furniture for Kron, David Edward and Target.

His product designs for Alessi, Disney, Swid Powell, Delta Faucet, American Express and Target focus on his desire to make common items unique. His efforts for Target allow design to be a part of our everyday lives with tea kettles, watches, toasters, coffee makers and telephones. He creates objects everyone can appreciate.

I also have visited the Humana Tower in Louisville, Ky., and appreciate its grand scale and views to the Ohio River.

And not to overlook his works in Indianapolis: the Thomson Consumer Electronics Building on North Meridian Street in Carmel, the NCAA headquarters downtown on the Central Canal, and the Indianapolis Arts Center in Broad Ripple. (My firm happens to be designing an addition to the arts center to provide instructional space for ceramics, sculpture and textiles.)

What do I appreciate most about Graves’ work? Two posters, one autographed for me! One advertises one of his architectural shows in Tokyo, and the other, a Max Protetch Gallery poster, celebrates an exhibition in New York.

I also like my Target toaster and tea kettle.•

White is a partner at Axis Architecture + Interiors. Send comments on this column to ibjedit@ibj.com.