Developers Drew Loftus and Kyle Robinson are on the cusp of completing that ever-important first project and are ready to move onto another—this one downtown.

The two bought a trio of vacant, connected buildings at 6334 Westfield Blvd. in Broad Ripple early last year and are nearly finished converting them into 9,000 square feet of office space.

Set to open in July, the Broad Ripple project, dubbed Rockdale, has attracted two tenants, not counting the pair’s Loftus Robinson Development firm. They are BlumLux, a jewelry and watch designer, and the Reliant Partners Commercial Realty brokerage.

Loftus, 27, and Robinson, 30, added a second floor to one of the dilapidated buildings to create a traditional feel with open ceilings and concrete floors.

The space ultimately could appeal to younger, tech-type entrepreneurs who prefer older, renovated buildings to traditional office space that loops the city north side near Interstate 465.

“There’s a big demand for that right now,” Loftus said. “And it’s along the Monon [Trail], too.”

For Scott Lindenberg, a founder and principal of Reliant Partners, that type of space is hard to find in Broad Ripple. His firm will move from Carmel to 1,600 square feet of space in Rockdale on Aug. 1, to be closer to clients in downtown Indianapolis.

The buildings housed at various times a boat engine repair shop, a veterinary clinic and a pet supply store. The southernmost of the three buildings is believed to be at least 100 years old.

Loftus Robinson Development is asking $26 per square foot for the space, which includes nearby parking. Overall, the pair sunk about $1.6 million into the project—or about the same amount they plan to invest in their next development.

In March, they purchased the building at 702 N. Capitol Ave., which formerly housed an ADT call center, and have landed a well-known architectural and design firm, Rowland Design, as its tenant. 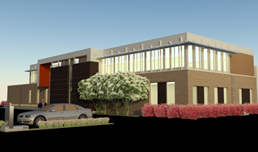 Plans for the building at 720 N. Capitol Ave. include adding a second floor to the structure. (Image courtesy Rowland Design)

Rowland Design Inc. plans to move from its current digs in Lockerbie Square at 701 E. New York St. in October to the building on North Capitol, where it will take the entire 11,200 square feet.

The building now is just 6,500 square feet. But like their Rockdale project, Loftus and Robinson plan to add a second story to the structure.

Even with the second level, the building still will be smaller than Rowland’s current space of 17,000 square feet. But the firm’s move enables it to tailor the space to better meet its needs, said Eric Rowland, a firm principal, whose mother Sally founded Rowland Design in 1968.

The firm has been at its current space in Lockerbie for more than 20 years. In the meantime, the advent of electronic renderings has reduced the need for library and warehouse space to store paper binders, Rowland said.

“We’re looking to reduce our lease costs not increase them,” he said. “It largely recognizes how the business has changed since 1992.”

Rowland Design plans to move the building’s entrance from North Capitol Avenue south to face the Cultural Trail, which runs parallel to the building. Bicycles will be available for employees to use during the lunch hour, Rowland said.

An environmentally friendly renovation of the building could help Rowland Design achieve silver certification through the Leadership in Energy and Environmental Design, or LEED, program.

Loftus Robinson and Rowland Design have an existing relationship. Eric Rowland designed the Rockdale project for the development team.

“The wanted to do a new office, and it just made sense for us to work together,” Loftus said.