Goodwill Industries of Central Indiana will nearly double its number of adult education schools in August and thinks it has only scratched the surface of the potential market for this new breed of schools. 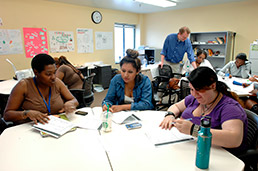 “We think that there is a real economic return on this,” said Scott Bess, chief operating officer at Goodwill. He noted that two-thirds of Excel Center students are on public assistance programs when they enroll and only one-third are employed.

By the end of this month, Goodwill will have graduated 350 students from its Excel Centers, and nearly all of them have either landed a full-time job or have enrolled in college full-time.

But after it launches its four new schools, Goodwill and other private education group won’t be allowed to open similar schools. That’s because the state Legislature in April placed a cap on the number of schools for high school dropouts that can receive status as charter schools and gain access to state funding.

Lawmakers and Gov. Mike Pence want to get a better handle on how much money might go into these schools. The Excel Center Goodwill launched in 2010 was the first to use the state’s charter school law to get state funding—but it was drawing funding designed for K-12 students and using it to educate adults.

The budget bill Pence signed in early May specifically lists Goodwill’s nine Excel Centers, as well as the Christel House DORS in Indianapolis and Gary Middle College in Gary as the only adult-focused charters that will be allowed—at least for the next two years.

In the just-completed school year, about 2,000 students were enrolled in dropout recovery schools. Each of Goodwill’s new schools will enroll about 330 students, and will bring the statewide total to about 3,300.

The state Legislature agreed to $6,600 per student for those schools, or about $21.7 million a year. But that funding is clearly less than the existing demand.
Gary Middle College, which is operated by the Indianapolis-based GEO Foundation, enrolled 180 adult students last year and has a waiting list of 600 people.

Emily Massengale, director of Christel House DORS, said her organization has applied for three more new charters for dropout recovery schools, but does not plan to open its next one until fall of 2015—after the legislative cap has expired.

Goodwill already won approval from the Indiana Charter School Board for three more Excel Center locations in Muncie, Marion and Johnson County. But the 2013 budget bill prohibits Goodwill from opening those schools.

Those dropouts are concentrated in large enough numbers around the state to support 60 or 70 dropout recovery schools, Bess said.

“We’ve really proved the concept works and it can grow to scale if need be,” he said. “The question is, from a public policy standpoint, do we want to do that?”