But central Indiana is also well on its way to being the arts competition capital of the world thanks to a nearly year-round series of “Who’s the best?” battles across the A&E spectrum.

In late July, winners were separated from the rest at both the Great American Songbook High School Vocal Competition and the Indianapolis International Film Festival. The latter finished just in time for me to start working through a stack of documentaries I need to screen as a jurist in this year’s Heartland Film Festival, where winners will be announced in October.

The visual art battle Art vs. Art is written in ink into my calendar (Sept. 27 at the Vogue) as it is every year—and as it should be for you if you like a little bread and circuses with your art appreciation.

In more refined circles, the American Pianists Association and the International Violin Competition of Indianapolis both stage events that help put Indianapolis on the worldwide arts map.

It continues. The Eugene & Marilyn Glick Indiana Authors Awards will be given out in October (Congrats if your money was on Michael Martone and James H. Madison). Both the Penrod Arts Fair and the Broad Ripple Art Fair are juried competitions. And in addition to its opening-day marching band battle, the Indiana State Fair features storytelling, singing, piano playing, fiddling, cookie decorating, and even creative sewing competitions.

Oh, and what Indianapolis event played in movie theaters around the country? Drum Corps International’s marchingband competition at Lucas Oil Stadium, that’s what.

If those aren’t enough, you can always catch a ComedySportz improvisation competition on any given weekend.

As much as many want to pretend it isn’t, the arts are often a competitive proposition. Every audition is a win/lose scenario, every production is a competition for people’s time if not money, every gallery show a choice of one artist or set of artists over another.

But the aforementioned Indiana events—and many others I haven’t mentioned—are more overt about their king-of-the-mountain stakes. In a world where kids are often taught that “we’re all winners,” these events name an actual winner, even if that word isn’t used.

Is that good for the arts, though?

I’d argue yes … for both the participants and audiences.

If the Center for the Performing Arts

marketed a high school vocalist concert, I’d guess the audience would be made up primarily of friends, family and teachers of the performers—with many of them attending reluctantly. But by making the event the culmination of regional competitions, dangling a prize at the end of the stick and putting the ultimate decision in the hands of high-profile judges including Michael Feinstein and Jane Monheit, the Palladium was packed. And the show terrific.

The performers benefited from the competition because it pushed them to bring their A+ game. The audience benefited by having the preliminary judging weed out the weaker performers. There was also the added pleasure of handicapping the singers as the evening progressed. And there were far more lead changes than the most recent Brickyard 400. 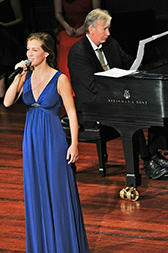 For me, Julia Goodwin from Baldwinsville, N.Y., shot out to an early lead with a disarmingly charming “Dream a Little Dream of Me.” But Miami’s Melinda Rodriquez was the first-half front-runner with her remarkably controlled “Autumn Leaves.” Acting chops and a playfully resigned attitude helped Chicagoan Kyrie Courter stay in the race with “Taking a Chance on Love.”

After an intermission pit stop, Rodriquez’s smartly sung “Blue Skies” didn’t provide a strong enough contrast to her first-act stunner (although I’d happily listen to a full set of her singing). The emotional resonance of Courter’s “I Who Have Nothing” pushed her to the front of the pack. But there seemed to be no doubt in the audience as to who would finish on top after Goodwin nailed “Feeling Good.”

None of my ongoing judgments got in the way of my appreciation for the work. The honoring of the winner didn’t diminish the talents of the others. And, I’m guessing, the great word of mouth from the outstanding show will help grow the competition, spark the competitors, and increase the prestige of the award for the winner.

As paradoxical as it might seem, picking a winner actually can create a win-win situation.•