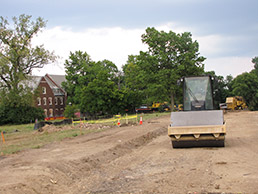 Instead, the first new non-residential building at Central State will be a charter school. Christel House Academy West broke ground last month on about nine acres donated by the city. Mayor Greg Ballard’s administration is encouraging the expansion of high-quality schools, not just for the benefit of the city’s students but also as a catalyst for development.

City planners figure the presence of school employees and regular student and parent traffic will make the area more attractive.

“Retailers will see this type of traffic and want to develop further into the site,” said Derek Naber, senior project manager in the Department of Metropolitan Development.

Higbee, principal of Central Greens LLC, said he was skeptical at first but came to believe in the notion, perhaps because there are few other options for the slow-to-progress development.

“It’s tougher than ever to get a retailer to look at a Central Greens site,” he said. “We feel the size and scale of the school does provide an anchor opportunity.”

Christel House, which has a waiting list for its south-side school, expects to eventually host 900 students on its campus, which will include elementary, middle and high school, as well as a dropout recovery program for people older than 18.

Until 2011, Central State was 150 acres of overgrown green space and dilapidated brick buildings that once served a state mental hospital. (The main hospital building was demolished decades ago.)

Redevelopment had stalled because of the 2008 recession, but picked up steam in 2011 with Pedcor Cos.’ tax-credit-financed The Steeples on Washington. There’s now a lengthy waiting list for the 144-unit apartment complex, and Pedcor is moving ahead with a senior-housing project.

Central Greens is also in talks with Chris Piazza, president of Reverie Estates, about converting four historic buildings into student housing, office space, an event hall and restaurant-brewery. With the exception of the Indiana Medical History Museum, none of Central State’s buildings has been renovated so far.

If nothing else, Higbee thinks Christel House will make people want to live nearby, though that’s not a requirement for admission to a charter school. Making the depressed area west of IUPUI more attractive is important, as Central Greens plans the first market-rate residences.

Higbee said he saw two reputable charter schools have the same effect on new housing in another depressed area, the Meadows, near East 38th Street and Keystone Avenue.

“If you [went] to the Meadows in the ’80s or even the ’90s, it was difficult to believe you would build 250 units of housing and get people to choose to live there.”

The Challenge Foundation Academy and Charles A. Tindley Accelerated School deserve some credit for the success of The East Village at Avondale, a mix of affordable and market-rate apartments, Higbee said of the project in which he was a partner. “I anticipate Christel House Academy will do the same thing for Central Greens.”

Ballard spokesman Marc Lotter said the administration is looking to bring all sorts of “anchor institutions” to neighborhoods in need. Those may include health centers, YMCAs or other types of K-12 schools, he said.

Urban planning experts usually define anchor institutions as universities and hospitals because they’re leading regional employers and have vast resources to offer poor neighborhoods. The concept is expanding to include small colleges and K-12 schools, which traditionally served many of a neighborhood’s social needs, said Ira Harkavy, founding director of the Netter Center for Community Partnerships at University of Pennsylvania and chairman of the Anchor Institutions Task Force.

But community schools don’t have much impact on redevelopment unless they’re backed by the funding and expert talent of a larger institution, Harkavy said.

“Higher eds and meds need to be seen as core partners,” he said.

Diane Arnold, executive director of the Hawthorne Community Center and president of the Indianapolis Public Schools board, supported Christel House’s expansion, but she has high expectations.

“We want them to support activities that we do on the west side,” Arnold said. “We have a quality-of-life plan for this community. We want the school to be part of that.”

Christel House won’t be the only charter school in the area, which is also home to Indianapolis Metropolitan High School and Padua Academy. But it will be the first to build, a project estimated to cost $13 million.

The school will also have priority access to a new running track and soccer field, which the city is building for about $900,000, Naber said. Those athletic facilities, funded by a Community Development Block Grant, will be operated by the parks department for public use, he said.

The track and soccer field is meant to replace the Golc Soccer Fields, which were torn out to make way for the new apartments, Naber said.

Christel House has 90 percent of its students qualifying for free or reduced-price lunches, but those students should have the same kind of school environment found in middle-class neighborhoods, Director Carey Dahnke said.

“We wouldn’t have developed another school that didn’t follow that philosophy,” he said.

Slated to open for next school year, Christel House will initially include the dropout recovery program and kindergarten through second grades, Dahnke said.

The west side still has a dearth of seats available in what the city considers high-quality schools, those that received an A or B under the state of Indiana grading system, Dahnke said.

“We didn’t want to plop down a school where there wasn’t demand,” he said.•