Home » LOU’S VIEWS: Life after ‘Wicked’: What to do once you’ve seen the blockbuster musical

The national tour of “Wicked” continues to draw crowds to the Murat Theatre, where it runs through Dec. 1. If you’ve already seen it this time around, you might be wondering what to do now to maintain your Elphaba fix until the show flies back into town in a few years.

Here are some ideas.

Consider trying your hand at seeing it again via the “Wicked” lottery. If you’ve got some time on your hands and want to gamble a bit of it, you could score $25 orchestra tickets. How? By showing up to the theater 2-1/2 hours before showtime, you can enter your name for a chance. Winners are drawn a half hour later. Of course, that leaves you with two hours to kill, enough for a brisk walk up Mass Ave to Indy Reads Books where, if there’s a copy on the shelf, you can … 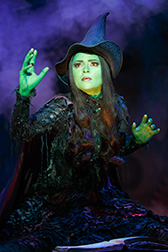 Above, Jennifer DiNoia as Elphaba in “Wicked.” (Photo/Joan Marcus)

Consider reading the book. Long before the musical was announced, I read Gregory Maguire’s novel, which I recall as being much darker and very, very different from the streamlined musical version. The book also spawned the sequels “Son of a Witch,” “A Lion Among Men” and “Out of Oz.”

Consider reading an even better book of Oz revisionism. Allow me to recommend Geoff Ryman’s 1993 book “Was,” which manages to combine the Oz story with that of L. Frank Baum and Judy Garland to stunning, albeit bleak, effect. Like “Wicked,” this is not a children’s book.

Consider adding your own thoughts to my “Wicked” review. Just visit IBJ.com/arts and chime in with your take.

Consider taking a look at the hilarious spoof script at Broadway Abridged. Warning: If you are a “Wicked” purist, you might not be happy. It opens with: “The show starts with a dissonant song as people jump around in what is apparently ‘choreography.’” Read the whole thing here: http://www.broadwayabridged.com/scripts/wicked.html

Consider a lesser-known Stephen Schwartz musical. Sure, you may already be familiar with “Godspell” and “Pippin” (either or both of which could find their way onto the 2014-2015 Broadway in Indianapolis season—we won’t know until March). But I’d argue that some of Schwartz’s best work never made it to Broadway.

I’m talking about “The Baker’s Wife” and “Children of Eden.” The former, which folded on the road in 1979, is survived by a wonderful recording featuring Patti LuPone and Paul Sorvino. Still considered a problematic show, I caught a strong production of it directed by Schwartz’s son Scott in 1997 at Indiana’s Amish Acres. “Children of Eden,” a large-scale musical based loosely on the Book of Genesis, is popular with regional theaters but hasn’t made it to Broadway.

Consider taking a chance on other new musicals. Here are a few for starters. Actors Theatre of Indiana will stage a concert performance of Ben Clark’s musical “The Circus in Winter,” based on Cathy Day’s wonderful novel, at the Center for the Performing Arts’ Studio Theatre on Dec. 18. I’ll be moderating a discussion after the show.

In April, Phoenix Theatre offers “Spun.” In May, Bloomington Playwrights Project will offer the next iteration of the new musical “Greta” (formerly known as “Kissing Frogs”). And, up the road in Chicago, Sting will launch his new musical, “The Last Ship,” in June.

Consider looking into the rest of the Broadway in Indianapolis series. Apart from the summer’s anticipated blockbuster “The Book of Mormon,” you won’t find productions on the scale of “Wicked,” but you will find first-time-in-Indy, non-Equity tours of “Memphis,” “The Addams Family” and “Ghost.”

Consider a trip to New York to see original Broadway Elphaba Idina Menzel in her new musical. That’s “If/Then,” created by the folks behind “Next to Normal.” It begins performances on Broadway in March.

Just don’t consider renting “Oz: the Great and Powerful.” The smug, stupid 2013 movie effectively cashed in on Oz revisionism without bringing anything remotely interesting to the table besides a wonderful opening credit sequence.•