Indianapolis-based Monarch Beverage Co. Inc. is suing officials of the Indiana Alcohol and Tobacco Commission in federal court, arguing the company should be granted the right to also supply liquor to bars, restaurants and retail outlets.

State law prohibits alcohol wholesalers from supplying both beer and liquor, forcing them to choose between the two. The system is so unusual that no other state in the nation regulates alcohol that way. 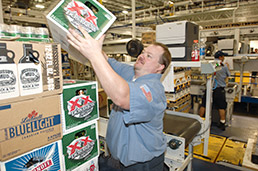 Monarch Beverage is the largest beer distributor in Indiana, with a territory covering most of the state’s counties. (IBJ file photo)

“The General Assembly has never provided an official explanation for why it chose to prohibit beer wholesalers from holding a liquor permit,” Monarch argues in its suit. “The available evidence, however, suggests that this restriction was enacted to further a post-Prohibition patronage system that operated to the benefit of state and local politicians.”

The belief, at least according to Monarch’s argument, is that following Prohibition, statewide politicians doled out licenses for liquor, and county officials handled those for beer. Alcohol wholesaling has remained separate since.

“The argument that we’re making is rather simple and straightforward,” said Brian Paul, a lawyer at Ice Miller LLP representing Monarch. “There’s no rational reason for that distinction.”

Monarch maintains in its complaint that the system violates the equal protection clause in the 14th Amendment to the U.S. Constitution by treating beer wholesalers unfairly.

Grocery and convenience stores wanting to sell cold beer have raised a similar challenge on constitutional grounds. In August, the Indiana Petroleum Marketers and Convenience Store Association filed suit in federal court, arguing the law governing cold-beer sales violates the 14th Amendment, by favoring “one class of retail over another.”

In addition to pursuing the right to sell cold beer, grocery and convenience stores want to sell beer, wine and liquor on Sundays.

The convenience and grocery stores launched their legal effort to sell cold beer only after attempts to get the General Assembly to change the law fell on deaf ears.

Monarch, too, has failed to convince legislators in its efforts to distribute liquor. It has tried unsuccessfully the last four sessions to advance a bill supporting its position before resorting to federal court.

The likelihood that lawmakers will have a change of heart anytime soon seems slim, said Ed Feigenbaum, who publishes Indiana Legislative Insight.

“In the short session, it’s probably unlikely, particularly with a lawsuit pending,” he said.

Monarch’s suit, however, has caught the attention of liquor distributors who oppose the company’s attempts to compete with them.

On Dec. 3, the Wine & Spirits Distributors of Indiana trade group filed a brief to intervene in Monarch’s suit, arguing that a change to the laws would enable Monarch to create a monopoly. The Indiana Beverage Alliance, which represents Anheuser-Busch wholesalers, supports the filing.

Monarch already is the sole distributor of Miller and Coors products in 69 of Indiana’s 92 counties, and reaches the entire state when counting the wine and craft beers that it distributes, said Marc Carmichael, president of the Indiana Beverage Alliance

“It’s a zero-sum game for the Legislature to make a change that dramatic because all it would do is shift business from some wholesalers to Monarch,” Carmichael said.

Founded in 1947, Monarch has become the biggest beer distributor in Indiana, in part because of a decision by Miller about a decade ago to begin distributing its beer through larger suppliers. Monarch benefited from its central location and quick access to interstates.

By contrast, 18 Anheuser-Busch distributors operate in the counties where Monarch is the sole Miller and Coors distributor, Carmichael said.

Under Indiana law, beer wholesalers are granted franchise protections that require distributors that take business from others to compensate them for the lost business. Those same rights aren’t granted to liquor distributors.

So any business Monarch might take from a liquor distributor if it succeeds would not cost the company a dime in payments to its vanquished competitors.

The sheer size of Monarch might tempt liquor brands to jump ship because Monarch would be better positioned to promote them, opponents of Monarch’s suit say.

“Monarch’s claim actually seeks preferential treatment that would put Monarch in position to dominate the wholesale tier of the Indiana alcoholic beverage market, to the detriment of Wine & Spirits’ members,” the group said in its brief to intervene.

The commission declined to weigh in, saying it would not render legal advice to an alcoholic beverage permit holder. Indiana Wholesale interpreted that to mean it could face a “substantial risk” of violations and backed out of the deal.

The E.F. Transit suit argues that the commission’s refusal to approve the agreement violates a federal transportation law as well as the supremacy clause of the U.S. Constitution.•