LAFAYETTE — GE Aviation unveiled more details Wednesday morning from its plans for a $100 million jet-engine assembly plant that officials say will provide high-tech manufacturing jobs over a generation or more.

"These decisions are 20- to 40-year decisions," said David Joyce, president of GE Aviation, which is based in Evendale, Ohio, and is the world's largest jet-engine manufacturer. "We don't take these things lightly." 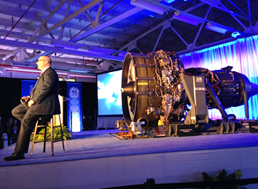 The company will break ground this year on a 225,000-square-foot building in Lafayette's Park 350, which is owned by a not-for-profit development authority. It could start hiring in 2015. The plant is expected to make the Leading Edge Aviation Propulsion, or LEAP, engine, which is currently being tested and will enter service in 2016.

GE committed to hiring 200 people by 2020 and expects to ship 600 engines a year from Lafayette, Joyce said. Indiana is not the only place that GE, working through its joint venture CFM International, will assemble the next-generation engine, called the CFM LEAP. The engine will also be built at an existing CFM plant in Durham, N.C., and in France, Joyce said.

The LEAP is the next version of the CFM56, which is the most successful commercial jet engine in history. The LEAP is the only option for Boeing's new 737 Max and one of two options on the Airbus A320neo. Both are narrow-body aircraft, the most common type of commercial aircraft sold.

GE chose Indiana for its roughly $100 million investment partly because of the potential for hiring talent from and working on advanced-manufacturing research with Purdue University. The state’s business-friendly environment also played a role.

Indiana Gov. Mike Pence said GE’s decision was based on the total package of a fiscally sound state government, a low-tax environment and the work force.

“Every Hoosier should be grateful to every man and woman that told our story,” Pence said.

The Indiana Economic Development Corp. offered General Electric Aviation up to $3.3 million in conditional tax credits and up to $332,000 in training grants based on the job-creation plans. The IEDC said it will provide the community with up to $1.35 million in infrastructure assistance from the state's Industrial Development Grant Fund.

The city of Lafayette and Tippecanoe County will provide GE with $3 million in tax-increment finance funds, which the company can use for its land-development costs, Lafayette Mayor Tony Roswarski said. GE intends to choose a developer to build on a portion of a 100-acre site and enter a long-term lease for the property, Tippecanoe County Commissioner Tom Murtaugh said.

“We think quality of life is very important,” he said. “Local governments need those resources.”

Indiana was one of five states in the running for GE’s new plant and in the end beat out Tennessee, said Joe Seaman, CEO of the Greater Lafayette Chamber of Commerce.

Former governor and Purdue President Mitch Daniels planted the seed 18 months ago at an event at GE’s corporate headquarters, where he first met Joyce.

“I was just doing what I did, trolling for business for Indiana,” Daniels said.

Joyce could not say exactly how many of the new hires will be engineers and white-collar professionals versus line workers. He said that assembly workers will be highly trained mechanics who must earn an industry certification. The company will also hire value-process and production engineers.

The jobs are expected to pay an average wage of $36 per hour.

The Lafayette facility will be GE’s fifth location in Indiana. The company employs nearly 1,700 Hoosiers across the state, including Fort Wayne, Bloomington, Terre Haute and Connersville