Mayor Greg Ballard’s hope of making Indianapolis the first U.S. city with an all-electric car-sharing service hinges on regulators’ approval of a rate hike to cover $16 million in installation and other costs to Indianapolis Power and Light. 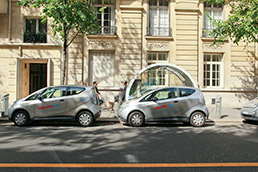 Bollore Group’s all-electric cars are parked near a rental kiosk and charging stations on a street in Paris, where the company runs the Autolib’ car-sharing service. (Photo courtesy of Autolib’)

The impact on IPL’s typical residential customers would be 44 cents a month, starting in January 2018, according to a petition IPL filed April 11 with the Indiana Utility Regulatory Commission.

The city filed testimony by Ballard and other officials to support IPL’s case, which is key to the utility’s agreement with the city to install as many as 1,000 charging stations at 200 locations to support BlueIndy LLC, the local subsidiary of Bollore Group, a French conglomerate that wants to launch a car-sharing service here.

If regulators don’t approve IPL’s request, “We will lose this opportunity, there is no doubt of that, and I presume other opportunities will be lost, not the least of which are the benefits our proposal here is expected to deliver,” Ballard said in testimony that accompanies the filing. “I believe a clear signal will be sent that Hoosiers struggle to see beyond what we know works today.”

Bollore’s car-sharing service would be modeled on Autolib’, which launched in Paris in 2011. Four-seat electric cars, made by Bollore, would be parked in dedicated curbside spaces. Users would go online or to electronic kiosks to reserve the cars for short trips around town. The cars operate without keys, and drivers don’t have to return them to their pick-up locations. The charging stations would be open to any plug-in electric vehicle for a fee.

Ballard called car-sharing “transformational” because it would provide another transportation option that also gives residents easy access to electric-vehicle, or EV, technology.

EV chargers alone aren’t enough to convert masses of drivers to the technology, he said.

“The missing piece right now is having a service with enough car chargers, i.e. volume—and the car,” Ballard testified. “This is not just a technology. It’s an end-to-end service, which is critical.”

IPL is asking regulators to approve the rate hike because it wouldn’t sell enough electricity to BlueIndy—at least not in the first 30 months—to cover its initial outlay. IPL projects the cost of extending lines at $3.7 million, but says it would see only about $700,000 in revenue.

If regulators don’t approve the rate increase by Oct. 31, BlueIndy can bow out of its pact with the city.

If BlueIndy scales up as much as the company and city hope, IPL’s costs would rise to about $16 million. That includes interest on the capital, though the project would not require IPL to borrow money. The utility argues that its investors should be compensated for the lost-opportunity cost of deploying capital that could go to other projects, such as environmental compliance.

The city’s deal with BlueIndy includes a way to mitigate the rate hike if the service is profitable. BlueIndy will share 15 percent of its profit with the city and IPL, with the utility receiving the first $4 million. IPL agrees to spend the money on the car-sharing infrastructure, thereby lessening the planned rate hike.

IPL’s share of profits would gradually decline until the utility was fully reimbursed, according to the agreement. At that point, the city would receive 95 percent of the profit sharing.

The city/BlueIndy deal runs for 10 years with the option to extend it to 15 years.

The biggest cost to the city will be removing downtown parking meters, according to the testimony of Director of Enterprise Development David Rosenberg. Under a 50-year lease the city signed in 2010, the city must reimburse the meter operator, ParkIndy, for revenue it loses to meters taken out of service for special events or other city needs.

The city roughly estimates its costs for the first phase of 25 car-sharing locations at $2.1 million, Rosenberg said. If BlueIndy scales up to 200 locations by June 30, 2016, as expected, the city’s cost could be $16.9 million, he said. Rosenberg said the city plans to apply for a Department of Energy grant to help cover those costs, which also include sidewalk improvements and signs.

Ballard first touted Bollore’s planned $35 million investment last June, saying the service would roll out this spring. Mayoral spokesman Marc Lotter declined to comment on Bollore’s progress, other than to say there would be an announcement in conjunction with the Electric Drive Transportation Association’s annual conference, which begins in Indianapolis May 19.

That’s when BlueIndy plans to have a free demo site set up downtown northeast of Washington and Meridian streets, according to the city/BlueIndy agreement. After the demonstration phase, BlueIndy would notify the city and IPL to proceed with 25 phase-one locations. As those sites are being tested, the company would schedule a “public launch,” triggering the start of its contract with the city.

BlueIndy President Herve Muller, based in Atlanta, did not respond to IBJ’s requests for comment. In testimony, he emphasized the parent company’s size and long-term investment in electric-vehicle and smartgrid technology.

“We are prepared to make a significant investment in Indianapolis, and we are prepared to be patient in expecting returns on this investment,” Muller said. “Unlike other companies that have in the past attempted ambitious projects in EVs and EV charging station deployment, we are backed by the Bollore Group, which is financially very strong.”

Indianapolis was attractive to Bollore because of political leaders’ willingness to make the service a reality and the corporate community’s embrace of it, Muller said. Although Indianapolis doesn’t have the population density of Paris, it has other factors working in favor of a successful business, including a large student population and weak public-transportation and taxi systems, Muller said.

The car-sharing service might end up on a smaller scale. Under its agreement with the city, BlueIndy committed to bring no fewer than 125 EVs with 250 charging stations at 50 locations.

BlueIndy plans to use the EV made by Bollore, the Bluecar, which is under review by the U.S. Department of Transportation. Muller described the car as similar in size to a Toyota Yaris and said it can run 150 miles on one charge, though most car-sharing trips last 30 minutes or less.

If the federal government doesn’t approve the Bluecar for use in the United States, BlueIndy will use Chevy Volts or another EV, under the city agreement.

Muller said it’s too early to determine the local pricing model, but he said the goal is to make the service affordable enough that people will ditch their own cars. In Paris, Autolib’ offers weekly, monthly and annual subscriptions with per-minute usage rates that decline as the subscription term increases. Daily subscriptions are free, and a half-hour of use costs 9 euros, or $12.44.

Bollore has been working closely with Energy Systems Network, a not-for-profit that promotes electric-vehicle and smartgrid technology in Indiana, to identify and assess car-charging sites.

“To borrow a phrase from Apple, it just worked,” Mitchell said in testimony in the IPL case. (He deferred media inquiries to Muller.) “It was easy to use, and I could see how customers in Indianapolis would want this kind of convenience.”

Mitchell said he’s driven virtually every electric vehicle and seen every type of charging station on the market today.

“What I saw in the system in Paris was certainly the most advanced networked charging infrastructure solution that I had ever encountered in the world and certainly the broadest operation of that kind of a network system.”•