Strategic Capital, which s seeking a tax abatement valued at $2.5 million to help offset investment costs, plans to begin construction this summer on a site adjacent to UIndy's south-side campus. The building is expected to open by the fall 2015 academic year. 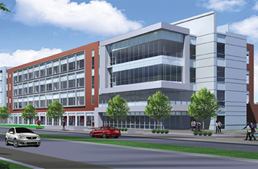 Under the tax abatement deal, the developer of the health sciences center would pay only half its property taxes over 10 years. (Image courtesy UIndy)

Under the arrangement between the university and Strategic Capital Partners, UIndy will lease most of the 156,000-square-foot building from the developer for an initial term of 11 years, with an option to purchase at the end of the lease agreement.

The abatement would enable Strategic Capital Partners to cut its property-tax bill in half, paying $2.5 million over the 10 years. The new building should add nearly $17 million in assessed value to the city's tax base, according to a city filing.

The project would allow UIndy to consolidate several of its programs and departments into one location. They include physical therapy, occupational therapy, nursing, kinesiology, psychology, athletics training and social work.

UIndy will lease all but about 20,000 square feet, which will be set aside for university partners that will provide health care services to the neighborhoods surrounding the campus.

Gene Zink, CEO of Strategic Capital Partners, said his firm is excited about the opportunity to work with the university.

“This one is special because of the commitment of the university to the community on the south side,” he said. “We, as a community, haven’t spent a lot of time thinking about the south side.”

The four-story, 80-foot-tall building would be constructed at the southwest corner of Hanna and State avenues.

UIndy is seeking several variances for the building, which would eclipse the maximum 35 feet permitted in the residential neighborhood. MDC is scheduled to hear the variance requests June 4.

The architect for the project is CSO Architects.

Several homes originally occupied the space. UIndy gradually purchased the homes and demolished them in favor of a parking lot for the college. A campus police administration building that sits on the property would be torn down, and those offices would be relocated elsewhere on campus.

UIndy spokesman Scott Hall declined to divulge whether the project received interest from other developers but said the university is impressed with Strategic Capital Partners’ portfolio of work.

“This company shares UIndy’s conviction that University Heights is a great neighborhood in which to invest, and we’re pleased to be doing business with them,” he said in an email.

Strategic Capital Partners is involved in the redevelopment of the impoverished Meadows area east of Keystone Avenue along 38th Street on the city’s east side. Billionaire investor Warren Buffet helped finance the $27 million East Village at Avondale apartment project.