Duke Realty Corp. is set to break ground within the next few weeks on a $12.5 million building on the northwest side that Interactive Intelligence Group Inc. will occupy as part of a major expansion.

The Indianapolis-based software developer announced its growth plans in May, in which the company said it will add 430 employees statewide by the end of 2016. 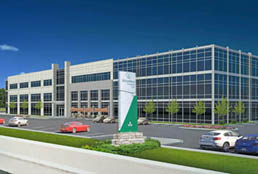 The 119,000-square-foot building from Duke Realty Corp. is expected to be finished by the end of next year. (Image courtesy Interactive Intelligence)

Duke will develop and own the three-story, 119,000-square-foot building in Woodland Corporate Park that will be built north of the Interactive Intelligence headquarters near West 79th Street and Interstate 465.

“We continue to expand, particularly here in Indianapolis, which has necessitated another campus building at our northwest-side world headquarters,” he wrote. “We’re fortunate that Indiana has such a well-educated and talented labor pool from which to draw. As a software company, it’s these high-quality employees that have enabled us to grow into a successful, publicly traded company capable of competing with competitors many times our size.”

Founded in Indiana in 1994, Interactive Intelligence has roughly 1,000 employees in Indiana and had annual revenue last year of $318 million, ranking it as the 14th-largest public company in Indianapolis.

Jeff Harris, managing director of NAI Meridian, brokered the deal and said land on which to construct a large building in the city is getting increasingly difficult to find.

“[There are] not a lot of large tracts of space essentially anywhere in town, with a couple of exceptions,” he said. “The office market is soft with a lot of space, but if you’re a large user, it’s tighter.”

The building is expected to be completed late next year. Interactive Intelligence already occupies nearly 300,000 square feet in four buildings nearby.

The architecture firm that designed the mostly glass building is Indianapolis-based Architects Forum.

Interactive Intelligence announced in May that it would add the 430 employees within the next two years and is seeking $2.6 million in property tax breaks from the city.

If approved, the city would reduce Interactive’s real property taxes for 10 years for a total of $1.8 million in savings on the $12.5 million real estate investment.

Interactive also is seeking another decade-long tax break worth $764,100 in personal property taxes on $10 million in new information-technology equipment.

The city’s Metropolitan Development Commission is set to vote on the abatements Aug. 6.

The tax breaks are in addition to $8.3 million in state tax credits and $300,000 in training grants the Indiana Economic Development Corp. offered Interactive, assuming the company meets its hiring commitments.