The not-for-profit that oversees the Indianapolis Cultural Trail and the Indiana Pacers Bikeshare program plans to shed its training wheels and renovate a former service station along the trail as its headquarters.

It also is working on plans to expand the trail into near-downtown neighborhoods while adding more bike-sharing stations, said Brian Sullivan, a partner at Shiel Sexton Co. Inc. and the trail’s board president.

“They won’t be done at the level of the Cultural Trail,” Sullivan said, “but they’ll still be very handsome additions.”

The Cultural Trail Inc. is raising funds to renovate its new space, which also will serve as a hub for the bike-sharing program.(Rendering courtesy of Rowland Design Inc.)

Both Sullivan and Cultural Trail Executive Director Kären Haley said discussions are in the early stages; they declined to elaborate on expansion plans. But Haley said any trail extensions or bike-station additions likely won’t be unveiled until next spring, once the bike-sharing program finishes its first year of operation.

Both the Cultural Trail and the Pacers Bikeshare have been wildly successful since their introductions to downtown. The Cultural Trail opened in May 2013 and its link to Fountain Square has been a particular boon to the Fletcher Place neighborhood, where several restaurants and drinking establishments are sprouting.

The bike-sharing program, which launched this April, is exceeding expectations. Organizers had hoped riders would purchase 15,000 24-hour passes in the first year. That number was eclipsed within three months.

The success is driving Cultural Trail officials to explore adding bike stations to the 25 that already exist, and trail links they’ve dubbed as “Cultural Trail light.”

Founded in 2011, Indianapolis Cultural Trail Inc. had been operating from the west wing of City Market until the bike-sharing program started. Needing room to assemble 250 bikes, the organization moved to vacant space along the trail at the northeast corner of Capitol Avenue and Walnut Street. 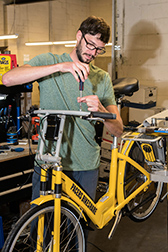 Mechanic Jordan Kingdon is part of the team that tunes up and repairs bikes in the program. All 250 bikes are inspected each month.

Now the not-for-profit is planning a $350,000 rehab to the roughly 1,650 square feet it occupies within the one-story, 3,000-square-foot building at 132 W. Walnut St. that originally housed a service station and maintenance garage.

Construction could start by the end of the month and last about eight weeks.

“They’re working in conditions not even air-conditioned, using a Port-o-Let,” Sullivan said, “so I’m really excited to give them a more dignified space to work in.”

The portion of the building Cultural Trail Inc. occupies sits on the north side of the trail in the section known as the Glick Peace Walk.

The not-for-profit aims to raise about $150,000 and is hoping to receive a match to that amount from an anonymous donor, Haley said. Additional funding will come from Local Initiatives Support Corp., which is providing a $20,000 façade grant to the building’s owner, who also is contributing an unspecified amount of his own funds to the renovation.

The owner, Ken Stanley, operates Sunshine Maintenance Services Inc. from the part of the building that fronts Capitol Avenue. Between the work to both sides of the building, the structure essentially will sport two new, separate facades.

“It’s a building that has been sort of invisible up until now,” LISC Executive Director Bill Taft said. “It hasn’t had improvements done to it in a long time, and you hardly even notice it. But we think it’s an important intersection, because of the Cultural Trail.”

The building’s renovation will complement improvements occurring on the west side of Capitol Avenue.

LISC also is providing a $20,000 façade grant to TwoDeep Brewing Co., which opened in August in a 7,000-square-foot space at 714 N. Capitol Ave. Just to the north is Rowland Design Inc., which moved there in late December. The interior design and architecture firm partnered with local developer Loftus Robinson to renovate the property at 702 N. Capitol Ave., which included the addition of a second story.

Rowland is the architect for the renovations to Cultural Trail Inc.’s space.

Improvements will include office space with a small meeting room, a storage area and a shop to maintain the bicycles. Each of the bikes receives monthly inspections from a team of technicians.

Overall, the not-for-profit has six full-time and four part-time employees.

“With the Cultural Trail being such a key piece of infrastructure, having a long-term home is really important to us,” Haley said.

Once the work is finished, Haley hopes to host events along the trail near the building. For instance, she recently held a yoga session on the Peace Walk.

But Haley and her staff aren’t quite settled in yet. They’ll be moving once again, albeit temporarily, and won’t return until the renovations are finished. They’re setting up shop just to the north in the 800 block of North Capitol, in space provided by local real estate developer Kurt Mahrdt.

Any growing pains the upstart group might be experiencing should subside once it grows accustomed to its new digs.

“This investment is clearly part of a long-term commitment for both the Pacers Bikeshare and the Cultural Trail,” Sullivan said. “Obviously, there were some chances taken, but the concept has proven itself very strongly.”•