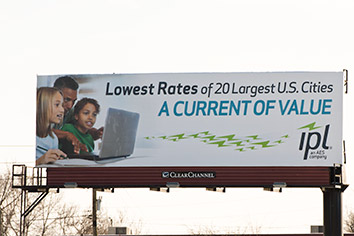 No matter how little energy customers use, Indianapolis Power & Light would be guaranteed more revenue under a recent proposal to raise rates and fees.

The rate case IPL filed with state regulators Dec. 29 includes big jumps in fixed fees, a trend utility observers are seeing across the Midwest. Utility companies say raising fees that aren’t tied to energy use is an appropriate way to recover their own fixed costs, but critics say it discourages efficiency and unduly burdens small users.

There’s no question the flat monthly fee for service, called a “customer charge,” would drive most of IPL’s bill increase. IPL says its rate proposal would cost the typical residential customer $7.63 more each month. If the customer charge goes from $11 per month to $17 per month, as IPL proposed, $6 of that hike would have no connection to energy use.

Small-business customers would see an even bigger jump in flat fees, which would go from $11.38 per month to $30 per month—a 163-percent increase—for those who use 5,000 kilowatt-hours a month or less.

IPL Director of Regulatory Affairs Ken Flora said the proposed rate structure focuses on fixed fees because many of the utility’s costs are in poles and wires, customer service and other systems.

“Those are costs that don’t go away, regardless of how much you use,” he said.

IPL’s fixed costs are actually much higher than what was proposed, Flora said, but the company doesn’t want to over-burden small customers.

“We think it’s a reasonable, modest increase that gets us a little closer to the cost,” he said.

State regulators have granted IPL multiple rate hikes to cover the cost of environmental mitigation and other investments, but this is the utility’s first request since 1994 for an increase to cover general business expenses, everything from customer service to copper wire. IPL says it needs $67.8 million a year in additional revenue.

While the cost of doing business is on the rise, IPL isn’t seeing new and bigger customers added to its territory.

“The ongoing cost increases are not offset by load growth as was the case in the past,” CEO Kelly Huntington said in her testimony filed with the Indiana Utility Regulatory Commission.

“There’s no question that the Wisconsin decisions are pushing rates in the direction of increasing the fixed monthly charge,” said Rob Kelter, an attorney with the Chicago-based Environmental Law and Policy Center, which opposed the Wisconsin rate increases.

Kerwin Olson, executive director of the Indianapolis-based Citizens Action Coalition, said utilities are pushing for bigger fixed fees because energy use is generally declining. The fixed fees will be a burden for the 60,000 IPL customers who already have trouble paying their bills each month, he said.

Another aspect of IPL’s proposal will have a big impact on rates, Olson said. IPL wants to keep its 12 percent return on equity, which is the profit margin on capital investments, while other investor-owned utilities in Indiana have a rate of return around 10 percent, he said.

The IURC will spend the better part of this year reviewing IPL’s request, and it’s not likely regulators will grant all of it, Olson said.

“They’re going to throw as much against the wall as they possibly can and hope it sticks,” he said of IPL.

To be sure, customers could still mitigate a rate hike by using less energy. A typical residential household using 1,000 kilowatt-hours per month could negate the $6 hike in customer charge by cutting electricity consumption by 82 kilowatt-hours. That’s a matter of installing a couple of compact fluorescent lights, or getting rid of an old refrigerator, Flora said.

In addition to uncoupling bills from energy consumption through higher fixed fees, IPL is the rare utility that charges lower rates for high consumption, Kelter said.

IPL has proposed increases to those rates, but customers would still get a break on the unit cost when using more and more energy.

That type of rate structure was popular decades ago when electric utilities were trying to encourage consumption and competing with gas utilities for heating customers, Kelter said.

Indiana regulators consider IPL to be proactive about promoting energy-efficiency, Huntington said in her testimony, and the utility has shown a commitment to “green” power. As recently as 2007, coal accounted for 79 percent of the power IPL generated.

If the IURC approves a separate, pending proposal, coal will drop to 44 percent of the portfolio by 2017, Huntington said.

IPL plans to convert its Harding Street power plant to natural gas, a move the utility says will add another $1 a month to customers’ bills.•