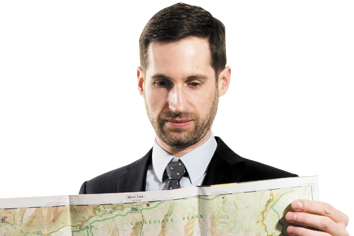 Dining with Dan: Early political memories for Brian Neale include a cookout with Dan Quayle at the vice president’s residence in Washington (his father was Quayle’s longtime treasurer). “Guard shack. Concrete barriers. Dogs. The guys have guns,” he recalled. “Dad opens our 1985 Dodge Caravan door and Quayle throws him a football. … It’s comforting to know that politicians are just people who happen to have a commitment to public service.”

Finding direction: After graduating as an Indiana University finance major into a depressed job market, Neale packed his belongings and drove west. “I figured if I hit the Pacific Ocean and came back home, then OK.” In Denver, he ran into a friend of a friend and found work with a bank. Watching real estate investments go sour in a down economy, he saw his job as helping people find their way out of difficult financial situations.

Beyond the law: After graduating from Indiana University’s Robert H. McKinney School of Law—and inspired to use his skills in public service rather than real estate law—Neale opted to head east. In D.C., he networked into a presidential appointment as senior adviser to the head of the U.S. Small Business Administration. The changeover to President Obama’s administration ended his appointment at the SBA, but he soon found a new home in Mike Pence’s congressional office as legislative director and counsel. When Pence was elected governor, Neale was invited to come along as health care policy adviser with a focus on the future of Medicaid. Now he’s at the forefront of Healthy Indiana Plan 2.0, the governor’s plan to expand health care to more than 350,000 uninsured Hoosiers.

Taking a hike: When not working, Neale likes to unplug completely—ideally while backpacking through Colorado “to reflect, admire God’s handiwork, recharge and challenge myself physically.” When looking at a map, he doesn’t see just the established trails but also the opportunities to find new routes. “That’s also the case in my professional life,” he said, “What we’re trying to do with health care is extend the trail of reform into new territory. The scenery changes when you step off the trail, and that can be some of the most beautiful scenery in the country … as long as I don’t get caught in a thunderstorm or get lost. But that’s part of the journey.”•