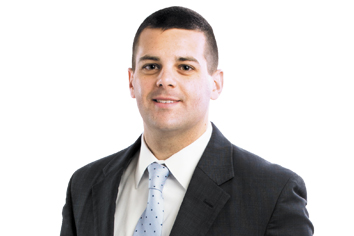 No rest: David Rosenberg graduated from the Indiana University Maurer School of Law on a Saturday and, that Monday, started work in the Mayor’s Office—where he had interned for Greg Ballard’s chief of staff, Chris Cotterill.

Working with the mayor: “The mayor, bringing his Marine background to the office, doesn’t micromanage. But he does expect you to do what you said you were going to do. He doesn’t want excuses. People don’t appreciate how apolitical he is. It doesn’t matter if it’s R or D. If he sees it as the right thing to do, he wants to get it done.”

Going hybrid: Among Rosenberg’s more recent tasks: Recruiting a company and working through the financial model for the city’s electric and hybrid-electric car initiative Freedom Fleet. “We’ll have the largest number of plug-in vehicles in the entire country by the end of 2015,” he said. “It really sets Indy up to be a model for other cities, proving you can save money and [by reducing demand on foreign oil] have an impact on the national security.”

Justice won: He’s also project manager for the consolidated justice facility, which is estimated to cost $408 million. “There have been lots of studies over the past 30 years, but others have been unable to tackle it. We’ve proven we can consolidate; monetize the inefficiencies; and build a safer, more efficient center for less than we currently pay. It’s revolutionary, and dozens of cities are looking at our procurement process. If the council passes it, we will be the model.”

Downtown downtime: Rosenberg says he loves hanging out downtown, living downtown and working downtown. “I’m pretty much a homebody, but I like trying new bars and restaurants with my buddies and girlfriend.”

Post-administration? “That’s the million-dollar question,” said Rosenberg, who didn’t follow that up with a million-dollar answer. But he did add: “I’ll be very sad to see the mayor go. He’s done amazing things and will leave a lasting legacy.”•