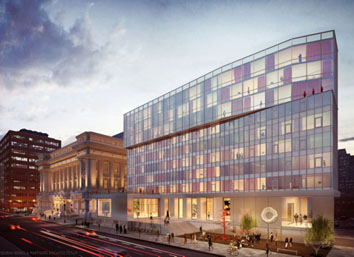 Louisville-based 21c Museum Hotels hopes to receive a $9.1 million loan from the city of Indianapolis to help it pay for a $55 million redevelopment of Old City Hall, the company said Thursday afternoon.

The project, which would add a modern 150-room hotel to the historic downtown building, also hinges on approval of an $11.3 million federal loan through the U.S. Department of Housing and Urban Development.

21c plans to finance another $29 million for the project through equity and debt. Other sources of financing would include federal historic tax credits, the company said.

The city would contribute $2 million from tax-increment financing funds, which will be paid back, to help arrange for private financing for the $9.1 million loan.

Construction could begin by the end of the year with completion slated for early 2018 if approvals are received promptly, the company said.

The project would rehab the Old City Hall and turn it into a “vibrant public space,” according to the company.

“We are thrilled to be a part of this innovative plan to revitalize Old City Hall,” said 21c Museum Hotels President Craig Greenberg in a written statement. “Like the city of Indianapolis, we believe that the arts can both energize a city, and also catalyze further economic development. 21c welcomes the opportunity to support the city’s arts and cultural organizations, and to make Old City Hall a hub for the arts once again.”

21c, which operates hotel-museums in Louisville, Cincinnati and Bentonville, Arkansas, hopes to build a chain of 15 such properties over the next five to 10 years.

Under the plan, Old City Hall would  house the hotel's lobby and a contemporary art museum with free admission. The museum would feature “rotating exhibitions that reflect the global nature of art today, as well as site-specific installations and cultural programming,” 21c said.

Tenants for Old City Hall have yet to be signed. But the Central Indiana Community Foundation will provide some financial support for the project and will serve as a partner in the redevelopment to assist in finding tenants for the building, the city said.

“This building has served our city well,” Mayor Greg Ballard said at the announcement. “We have searched hard for a reuse that is worthy of this type of building.”

Spaces on the second, third and fourth floors of Old City Hall would be leased to arts-related tenants. Those spaces would be managed by 21c, which said it will work with the city to lease the spaces.

The project will be designed by New York-based architects Deborah Berke Partners, which was recently picked to design the nearby distribution headquarters for Cummins Inc.

Indianapolis city leaders have considered converting the old City Hall property into a hotel for at least a few years.

In 2013, the Washington, D.C.-based National Trust for Historic Preservation held its annual conference in Indianapolis and floated ideas on how to revive the old City Hall. An upscale hotel, brewery and event center were among the suggestions.

The building opened in 1910 and housed city offices until the arrival of the City-County Building in 1962. Then, the Indiana State Museum introduced two generations of schoolchildren to its gravitational pendulum, which swung from the 85-foot open rotunda. In 2002, the Indiana State Museum moved to White River State Park. The building then housed the interim Central Library until 2007.

The state since has handed ownership of the building to the city and, more recently, the adjacent parking lot as part of a land swap with the city. In return, the city handed the state a tract of land along the Central Canal.

The city would continue to own the Alabama Street lot on which the hotel will be built and will lease it to 21c for $1 per year.

The Metropolitan Development Commission is expected to hear plans for the project on Wednesday.