Home » For Angie’s List CEO, equality stand was years in the making

For people who know Angie’s List CEO Bill Oesterle, his stand against the Religious Freedom Restoration Act came as no surprise.

Oesterle wasn’t the first business leader to denounce the measure, which sparked a national firestorm and was widely seen as anti-gay. But he was among the first Indiana Republicans to vocally support gay rights, channeling inspiration from his grandfather who fought anti-Semitism in the 1950s and the tragic stories of gay people he has encountered over the years.

The 49-year-old married father of six has been an outspoken LGBT advocate for at least a decade. In 2004, he helped make history when then-candidate Mitch Daniels became the first in state politics to enact a campaign policy that prohibited hiring decisions based on sexual orientation and gender identity.

“He’s the one who brought it up,” Daniels said of Oesterle, his campaign manager for the gubernatorial run.“I mean, we were going to operate that way, but he thought it would be useful to make a statement and put it there for the world to see.”

Oesterle’s past is peppered with stories that have shaped his view on the issue, he and people who know him said.

A friend of his at Harvard Business School struggled with coming out. Another friend and fellow Republican committed suicide a few years ago after being condemned for his sexuality. A lesbian he knows endured tremendous hardship “that was the result of nothing more than her personal identity,” Oesterle said.

“And it’s abhorrent to me.”

Oesterle is known for his work with Daniels and for his role as chief executive at Angie’s List. Even while building the company, which he founded in 1995, he supported equal rights.

Kathy Sarris, a gay Republican whose LGBT-advocacy work goes back to the 1970s, said Oesterle was a sizable financial backer of her gay-rights group Indiana Equality. Sarris said, “There were times when Bill Oesterle, quite frankly, kept the doors open.”

The measure passed in December 2005 and, at a large Republican dinner the following spring, Oesterle commended Keller.

“Bill was the chief speaker and he pointedly thanked me for having the courage to vote for it,” Keller said. “Hundreds of people were there, including social conservatives who were not pleased with what he said.”

Oesterle, a lifelong Republican, lives in Midtown Indianapolis with his wife of 18 years. He said he chose the Republican Party because he believes that “ultimately it is the party of personal liberty.”

“Sometimes the party gets confused about that, but I believe that fundamentally to be true,” Oesterle said. “It’s about limited government, personal liberty and personal responsibility.”

“I thought I could effect change on this topic of gay marriage and, boy, was I wrong,” Oesterle said. “I have complete buyer's remorse.”

But Oesterle dealt a sizable public-relations blow to the governor when he announced a week ago that Angie’s List would halt its $40 million Indianapolis expansion plan because of RFRA. The plan involved city and state taxpayer money.

Critics suggested the company’s move was a convenient way to back out of an overly ambitious proposal that might not have won City-County Council approval, a notion Oesterle dismisses.

Oesterle personally lobbied against RFRA before it became law, even though his company hadn’t taken a board-approved stance. When Pence signed RFRA into law March 26, Oesterle said he couldn’t stand to accept state incentives while opposing a state policy—particularly one that could hurt his company’s chances of fulfilling hiring commitments.

As he pondered his next move, Oesterle said a photograph of the RFRA signing that appeared the next day left him no choice but to sever expansion talks with the state.

In the picture, Pence was flanked by religious lobbyists Micah Clark, Eric Miller and Curt Smith, the state’s three most outspoken opponents of gay marriage.

“I know exactly who those people are, and I know what their message is,” Oesterle said. “And if that’s who’s running the state’s agenda right now, we are not going to participate in a partnership.” 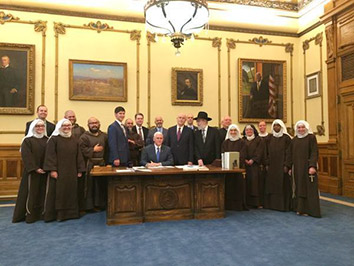 Oesterle said his views were born out of the experiences of his grandfather, a New York Baptist minister in the 1950s and a civil rights combatant.

“Members of the Jewish community in the Bronx were suffering discrimination at that time,” Oesterle said, on fronts including housing discrimination. “And my grandfather actively worked to end [it].”

Oesterle’s views were also shaped by a gay friend from his days at Harvard, where he earned an MBA in 1992. Oesterle said he was moved by how distraught the friend, a dorm hall mate, was about contemplating coming out of the closet to his parents.

“He was terrified that they would never speak to him again,” Oesterle said, “and I thought that was horrible.”

Sarris said Oesterle and Keller were in rare company as non-gay, vocal LGBT advocates in either party in the early 2000s. Oesterle was the main liaison between Daniels and the gay community, she said.

Daniels, who sat on the board of Angie’s List, has been known for steering clear of divisive social issues and focusing on things people agree on. He said he and Oesterle were like-minded in that regard, and Oesterle was the single biggest influence in his run for governor.

Those who have worked with Oesterle said he doesn’t wear LGBT activism on his sleeve, but he’s far from a closet supporter.

Angie’s List CFO Tom Fox, one of several gay employees there, said he doesn’t think Oesterle is simply “tolerant” of the LGBT community, but welcomes its people and celebrates diversity.

Speaking about pro-LGBT stances Oesterle has taken, Fox said: “He’s not running for office, but he’s taking a stand on issues that are important to him—for personal reasons, for his company, for the state of Indiana. It just points to the genuine nature to his feelings on the issue.”

Keller, the pro-gay Republican, said: “It’s one thing to be quietly for it. It’s another thing to speak out. And Bill has put his checkbook right beside his speaking out.”

Jerame Davis, who used to work for Indiana Equality, said it’s refreshing to hear Republican voices like Oesterle’s. Davis, executive director of Washington, D.C.-based Pride at Work, said gays have long viewed Indiana as the “middle finger of the South” when it comes to gay rights, and folks like Oesterle can change that.

“More Indiana Republicans need to look to him as the future of their party,” Davis said. “They may have a super-majority now, but if they keep acting like they have, that’s not going to last.”•