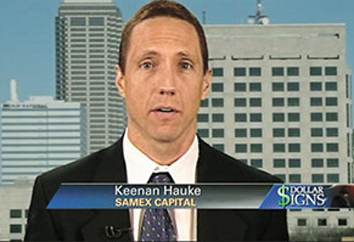 The more than 90 investors who lost $9.7 million in a securities fraud perpetrated by Fishers hedge fund manager Keenan Hauke will recover about 33 percent of their losses—a far better outcome than is typical in cases of its kind.

“It is 2 to 5 cents on average,” said Mark Maddox, whose Maddox Hargett & Caruso law firm brings claims on behalf of investors.

A final hearing in Hauke’s receivership is scheduled for Friday afternoon in Hamilton Superior Court. Investors received a $1 million distribution in 2013, and about $2.2 million more is ready for distribution, said receiver William Wendling, senior partner with Campbell Kyle Proffitt in Carmel.

Hauke, who was sentenced to 10 years in prison in 2012 after pleading guilty to securities fraud, had been an IBJ investing columnist for nine years when news broke in 2011 that he was under investigation. Hauke, who ran Fishers-based Samex Capital Partners, also made regular appearances on CNBC, Fox Business Network, Bloomberg Television and Bloomberg Radio.

State and federal investigators found that after Hauke suffered massive losses in his hedge fund in 2004, he orchestrated a scheme to cover them up, generating fake account statements for clients that showed money he didn’t have and returns he hadn’t earned.

Wendling said credit for the robust recovery should go partly to Hamilton County Judge Richard Campbell, who oversaw the case, personnel with the Indiana Securities Division of the Secretary of State’s Office, and Scott Starr, an attorney with Starr Austen & Miller in Logansport who represented the receiver in litigation.

Starr last year came up big in a lawsuit against DeWitt & Shrader PC, which served as the accounting firm for Samex from 2006 to 2011. The firm agreed to pay $1.8 million to settle allegations it failed to monitor Hauke’s accounts and committed negligence and fraud.

Wendling also recovered about $275,000 by selling a mortgage-free condo Hauke owned in Barbados. An asset freeze imposed by the court also enabled Wendling to sell off other property, including gold and silver coins.

“It was pretty exciting we were able to get back as much money as we were for these folks,” said Wendling, whose law firm has received more than $630,000 in fees working on the case.

Not all the asset-recovery efforts worked out. For example, Wendling abandoned efforts to sell off Hauke’s Fishers home because Hauke owed more on the property than it was worth.

Hauke is an inmate at the McCreary United State Penitentiary in Pine Knot, Kentucky. One of his fellow inmates there is convicted Ponzi schemer Tim Durham.

Victims of Durham’s fraud, which cost 5,000 Ohio investors more than $200 million, have not fared as well as Hauke’s. More than six years of work by a team of attorneys in Cleveland has yet to lead to any recovery for investors.