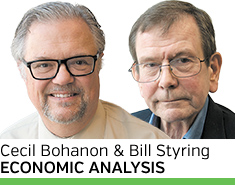 Innovation is capitalism. Only under capitalism does innovation flourish.

More important for our welfare, capitalism is what makes the fruits of innovation available to the common man.

Capitalism couples property rights with prices and profits. These signal to others what we want. Not what others dictate that we ought to have. They reward innovators for constantly tearing down old products, processes and markets and replacing them with new ones.

Innovators come up with things we never even knew we wanted. Economist Joseph Schumpeter coined the perfect term for this ever-changing landscape: the “gale wind of Creative Destruction.”

But capitalism is also the most incredibly efficient engine invented for the innovator to bestow benefits on fellow citizens. Queen Elizabeth I had silk stockings. It took DuPont Labs to give nylons to the commoners.

Queen Liz had an army of servants to prepare food, wash and clean, and light her plentiful candles. It took Edison and Westinghouse to pipe electricity into every humble hovel, powering capitalist washers, dryers and Raytheon’s microwave ovens.

How could any of these things possibly have happened without a Department of Energy?

Liz never dreamed of the simple idea of putting various foodstuffs under one roof and letting peasants of modest means choose among the offerings, but Clarence Saunders did. It’s called a supermarket.

You don’t have to search far for more evidence. What are the most dynamic major parts of today’s economy? Most would say Silicon Valley and energy.

Bell Labs gave us the semiconductor and put the “silicon” into Silicon Valley. Hydraulic fracturing unlocked shale oil and gas. Fracking didn’t come from risk-averse bureaucrats; wildcatters such as Mitchell Energy refused to believe it couldn’t be done.

Government direction can (theoretically) administer existing structures for a short time with tolerable efficiency. But it ain’t so swift at economic progress.

To be sure, there is a “destruction” part of creative destruction. Crews and owners of whaling ships would have shot Rockefeller on sight. Makers of vacuum tubes were not pleased when the transistor came along.

But destroying the old gives birth to the new. That’s what innovators do, to our enormous benefit.•

Bohanon is a professor of economics at Ball State University. Styring is an economist and independent researcher. Both also blog at INforefront.com. Send comments to ibjedit@ibj.com.