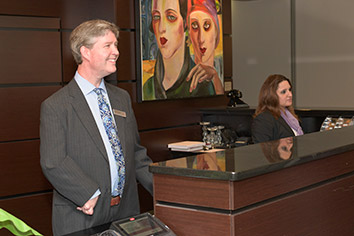 An Indianapolis not-for-profit is readying to open a 150-room Courtyard by Marriott in Muncie billed as a first-of-its-kind teaching hotel for people with disabilities.

The six-story hotel owned and operated by The Arc of Indiana will house the Erskine Green Training Institute, a facility that will offer nine- to 13-week courses for up to 200 students a year. Students will live on-site and train for a variety of jobs in the hospitality and food-service industries.

“Once people realize the scope and significance of this project and what it could mean not just for the students but the entire hospitality industry, I think it could become a national model,” said Jim Dora Jr., CEO of Indianapolis-based General Hotels Corp., which has been hired to manage the hotel.

The hotel will include a sandwich and coffee shop and a full-service restaurant run by the owners of Scotty’s Brewhouse, where students of the institute also will train and work. At least 20 percent of the staff of the hotel and restaurant will be people with a physical or mental disability.

The institute is named for former Brooklyn Dodger Carl Erskine and his wife, Betty, and Indiana University basketball star Steve Green and his wife, Lana. Erskine, a retired Anderson banking executive, and Green, who, after playing professional basketball, became a dentist in Fishers, are longtime advocates for people with disabilities. Both have children with Down syndrome.

The institute—in conjunction with Ball Memorial Hospital—also will offer training for disabled students interested in working in the health care industry.

“This is the first time in the U.S. something of this scale has been done in a hotel,” said Dora, whose company owns 11 Indiana hotels including Crowne Plazas downtown and at Indianapolis International Airport.

The Courtyard by Marriott will open in December as Muncie’s only downtown hotel.

Class registration opened in June and officials from The Arc expect the first round of classes—which begin in January—to be full by early September. They are limiting first-year enrollment to 80 students while the program is fine-tuned.

The Arc is working with the Indiana Hospitality & Lodging Association on curriculum; graduates will be certified by the IHLA.

“The certification is designed to demonstrate a level of training that a hotel or restaurant operator can count on,” said Patrick Tamm, Indiana Restaurant & Lodging Association president. “That’s a key piece to this. I’m convinced, once word gets out, there will be a long line waiting for these employees.”

Officials for The Arc of Indiana, an organization advocating for and serving people with intellectual and developmental disabilities and their families, said having students live at the hotel during training will prepare them to work in the fast-paced hospitality industry.

The Arc is working with the state’s Vocational Rehabilitation Services program and private donors to secure scholarship funds for students; tuition will cost $9,000 to $12,000.

The project was initiated four years ago to answer one of The Arc’s main challenges: finding jobs for people with disabilities.

“We have an 82-percent unemployment rate among people with disabilities,” said Kim Dodson, The Arc of Indiana’s executive director. “It’s been that way for a decade. We wanted to do something that moved the needle and we think this will do that.

“We not only advocate for change; we are working to be part of that change by developing the Erskine Green Training Institute and the nation’s first teaching hotel,” Dodson said.

Dora and Dodson envision the school’s graduates learning skills to work in a number of positions, from food preparation and front-desk management to custodial and housekeeping.

“This is great because a lot of hotels simply don’t have time to do this type of training,” Dora said. “As these associates are trained, if they live in cities where I have hotels, I’ll be chasing them down to come work for me.” 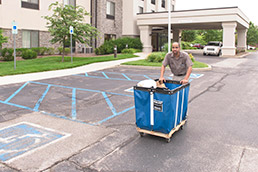 Juan Jordan works at Springhill Suites in Castleton after training through Noble, the Indianapolis chapter of Arc of Indiana. (IBJ photo/Eric Learned)

Already, Dodson has received inquiries from potential students from across Indiana—and beyond.

And not just from students. State officials and organizations from Florida, New York and Washington have contacted The Arc to ask how the hotel and institute work.

“In our industry, it’s hard to find good people to come to work every day,” Dora said. “This is a win-win for me. First, I get to run a great hotel in Muncie, and it allows us to help people who could then become great [employees] for us.”

The turnover rate in the hospitality sector rose for the fourth consecutive year in 2014, according to the U.S. Bureau of Labor Statistics, to 66.3 percent. That’s up 10 percentage points since 2010. When the economy is rolling and jobs are more plentiful, industry turnover can top 80 percent.

“At any given time, your average 150-room hotel could have 30 to 40 job openings,” said Mark Eble, Midwest regional vice president for San Francisco-based PKF Hospitality Research. “Hiring for hotels is a universal and never-ending challenge.”

“We think we’ll have a highly dependable, high-morale and stable workforce to offer,” Dodson said.

The new Courtyard by Marriott also will provide a big boost for the city about 40 miles northeast of Indianapolis.

“For downtown Muncie, this is a game changer,” said Joann McKinney, president of the Horizon Convention Center, which the hotel will be connected to via an indoor walkway.

Muncie lost its only downtown hotel—Hotel Roberts—in 2006. The structure is being converted into a senior-living facility. Since 2006, McKinney said, downtown businesses have seen a 20-percent to 30-percent decline in revenue.

While the hotel is five months from opening, McKinney said convention bookings at her facility are already picking up.

“We’ve already booked six conventions for 2016, with the first one in January,” she said. “This is just the beginning, and I don’t think any of this business would have come here if it wasn’t for this new hotel.”

The Arc pledged to consider holding conventions at the Horizon Convention Center, McKinney said, and the facility also is attracting other organizations and businesses that work with people with disabilities.

“This has just opened a tremendous amount of doors for us,” she said. “We’re hearing from organizations nationwide.”

Seeds of an idea

The idea was sparked in 2011 when Jeff Huffman, an Arc board member and former Muncie resident, drove by the closed Hotel Roberts.

He proposed the site to Arc executives, who had been pondering the idea of opening a facility to train people in the growing hospitality industry. In 2012, The Arc huddled with new Muncie Mayor Dennis Tyler, who had worked with Dodson and other Arc officials on autism issues when he was a state legislator.

The Hotel Roberts site wasn’t available, but Muncie officials agreed to give The Arc a downtown parcel composed of an empty lot, a parking lot and part of a street at no charge. In exchange, The Arc agreed to build the hotel, which is to be run as a tax-paying, for-profit business.

The Arc set out to raise $21.5 million for construction and $3 million for startup operating funds. Another $5 million is needed to launch the institute. Officials secured $5 million from the Indiana Economic Development Corp. and are seeking federal funding.

Overall, Dodson said, The Arc has raised 52 percent of its $30 million goal.

Muncie is paying for a parking garage and the connector from the hotel to the convention center.

“Our model is to have the hotel completely paid for by year five of operation through our fundraising efforts,” Dodson said. “Our feasibility study shows us making a profit in year one of operation. If this holds true, we will be using the profits of the hotel to go back and support the mission of The Arc and to open up other business ventures to employ and train people with disabilities. We know not everyone with a disability wants to work in a hotel, restaurant or health care setting.”

There also are plans to provide space within the hotel for businesses run by people with disabilities, Dodson said.•