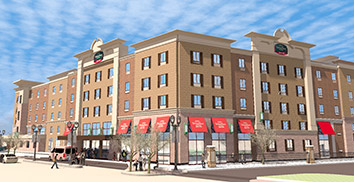 The monthly meetings of the Stadium Village Business Association are starting to get a little livelier.

Emboldened by the proposed development of a Marriott hotel, and prospects for another new hotel, the group that promotes downtown’s south side is beginning to lay the groundwork to transform the largely ignored area into a destination.

“It’s not Mass Ave; it’s not Fountain Square,” said Steve Alexander, owner of Prince/Alexander Architects Inc. and president of the business association. “But our strategy is to bring sex appeal to the south side.”

The group’s meetings are becoming so lively that developer Christopher P. White even made an appearance at its July gathering to pitch his $11 billion proposal for the former GM stamping plant site and areas surrounding it [June 29, IBJ].

White operated Premier Properties USA Inc. before his conviction in 2009 on a fraud charge stemming from a bad check he wrote. He now is hoping to make a return with an unlikely plan to redevelop 1,100 acres into a host of entertainment, residential and commercial projects.

The business association’s vision is not quite so bold as White’s. But the group is developing a marketing plan and is hitching its wagon to Lucas Oil Stadium, the area’s biggest draw, in hopes of attracting more housing and retail, as well as additional sports venues, to create an Olympic-type village.

Topping the Stadium Village Business Association’s wish list is a soccer stadium for the Indy Eleven that members want built on 10 acres of vacant land near Lucas Oil that’s on the market and owned by Minneapolis-based Valspar Corp. It has held the land since its 2000 acquisition of Lilly Industries Inc.

A stadium with a housing component, similar to the soccer field at the University of Notre Dame, would be ideal, Alexander said.

“That’s the perfect prototype,” he said.

Other options the group is seeking include an ice rink and complex to replace the aging facilities at Pan Am Plaza, once the favored location for the offices of sports governing bodies. It also hopes to land a new Indianapolis Tennis Center to replace the one demolished in 2010 on the IUPUI campus to make way for parking and an NCAA headquarters expansion.

Downtown’s south side is challenged more so than other, trendier neighborhoods by a smattering of industrial sites amid run-down homes with little or no historical value.

But the presence of corporate heavyweights Eli Lilly and Co. and Rolls-Royce Corp. could help spur activity.

Just this month, an Illinois-based developer received city approval to vacate an alley to help pave the way for a 140-room extended-stay TownePlace Suites by Marriott two blocks east of Lucas Oil Stadium.

MORE FROM IBJ
See the full-size map of downtown's south side.

Hillcrest Development Inc. wants to build the five-story, $17 million hotel on a parcel south of Merrill Street, between Russell Avenue and South Meridian Street as they come to a point. The developer could break ground in October.

Farther south, at 915 S. Meridian St., just south of the Greek Islands restaurant, Alexander and Robb Day, a broker at Coldwell Banker Commercial, are forging ahead with plans for a mix of apartments, retail and a hotel.

A joint venture involving local developer TWG Development LLC had planned to build 120 apartments on the site as part of a mixed-use development anchored by a restaurant. TWG and Vince Shimp, a local appraiser who operates South Meridian Properties, paid $459,000 for the 22,000-square-foot building.

TWG ultimately determined that the rental rate the area can command couldn’t support the $19 million investment, and turned to Plan B—a music venue to be called The Grand Station, about the size of The Vogue in Broad Ripple.

The would-be operator, however, backed out, leaving TWG empty-handed.

It’s now selling the property to Alexander and Day, who face a mid-October deadline to close on their deal. Alexander declined to provide more specifics on the project.

“I do think it’s coming,” he said, “but to try to do something now would be a challenge.”

Several other area properties are available for redevelopment. But whether they’re priced to sell is the big question.

“Part of the dynamic is land costs and people’s perceptions of how much they think their land is worth,” Alexander said. “That means that we have to work on sites where there’s a realistic understanding of real estate values.”

The 4-1/2-acre former Indianapolis Welding Supply property sits in the shadow of Lucas Oil Stadium on the south side of West McCarty Street and is listed for $4.25 million, or nearly $1 million an acre. The vacant site contains a 17,630-square-foot building and another 5,432-square-foot structure.

The price per acre equates to $23 per square foot, which is at the high end of the downtown range, said Bill Ehret, who operates the local office of the real estate services firm Avison Young Inc.

“Could [the property] get there in the next five years? Possibly,” he said.

Lisa Taylor-Franke of Davis Morrison Realty has listed the property since March and is beginning to field more calls from potential developers.

“The close proximity to the Lilly campus, the Rolls-Royce campus and, of course, to Lucas Oil Stadium—that’s really driven a lot of the interest,” she said.

To the east, local broker Ralph Balber, president of Alo Property Group, is listing a vacant home and adjacent lot on South Meridian Street, just north of where the Marriott hotel would be built.

Priced at $875,000, the 0.34-acre sliver commands even a steeper price per acre than the Indianapolis Welding Supply property.

“It’s going to take someone who obviously wants to do some sort of development there,” Balber said, “but I think we have it priced right.”

For decades, Shapiro’s Delicatessen on the southwest corner of South Meridian and West McCarty streets has been one of the few south-side destinations.

But the Stadium Village Business Association and other neighborhood leaders are determined to change that.