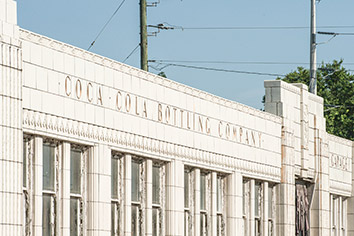 The former Coca-Cola bottling plant on Massachusetts Avenue might have lost some of its architectural luster over the years. But the 1931 art-deco building probably still holds enough historical prominence to prevent its destruction as part of a redevelopment of the property.

Indianapolis Public Schools, which owns the 11-acre site on which the two-story structure sits, has put the property on the market—likely touching off a fierce competition among developers to turn the site adjacent to bustling College Avenue into a hub of housing and retail activity.

The massive, 285,000-square-foot edifice is within the Chatham Arch & Massachusetts Avenue Historic District, which grants it certain historical protections.

Any changes to the plant’s exterior would need approval from the Indianapolis Historic Preservation Commission. 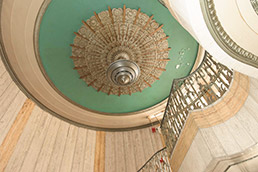 “It’s not an insignificant building, architecturally speaking, so I’m quite sure the commission would take that into consideration on any proposal,” IHPC Administrator David Baker said.

Local architects Rubush & Hunter designed the building for the Coca-Cola Bottling Co. that IPS now uses as part of its bus-maintenance and operations center.

The gleaming white glazed terra cotta exterior is ornamented with chevrons, sunbursts and stylized pilasters. The interior features terrazzo floors and concrete ceilings, in addition to colorfully tiled walls and a large circular stairwell with iron railings at the facility’s entrance at the east end of Mass Ave.

“I just can’t imagine that there will be a permit issued to demolish that building,” said Susan Williams, an IHPC member who lives a block to the west. “It’s just glorious.

The property, just east of College and stretching from Massachusetts to the south and 10th Street to the north, also includes three garage buildings totaling 72,000 square feet.

IPS announced July 31 that it is seeking requests for qualifications due Aug. 27 before opening the property up for bid. The school system hopes to select a developer by the end of the year—a time line that seems aggressive to some real estate veterans, given the property’s significance.

It’s the largest tract in the flourishing Mass Ave district to hit the market in years. By comparison, it’s nearly twice the size of the entire former Market Square Arena site where Cummins Inc. is building a distribution headquarters and Flaherty & Collins Properties a 28-story apartment-and-retail project on a total of six acres.

Development of the IPS property also could serve to link the less-developed east end of Mass Ave to the more vibrant stretch west of College.

Several developers agree a mix of housing and retail makes the most sense for the site.

“I love the location,” said Dennis Dye, TWG Development LLC principal. “For us, [the challenge is] balancing the historical aspects of the site and getting the right density to make it transformational for Mass Ave. It’s tricky, but I think it’s doable.”

Attracting a Target store as part of the redevelopment could be a long shot, but would be a welcome addition for downtown’s growing population. City officials in recent years have tried to lure the retailer downtown, first to fill the vacated Nordstrom space in Circle Centre mall and then to where Cummins is constructing a divisional headquarters.

A Target spokeswoman said via email that the Minneapolis-based retailer has “nothing to share about a store in Indianapolis at this time.” But perhaps working in the IPS site’s favor is that Target said it typically locates stores in “trade areas that are underserved or have the potential for new population growth”—both factors that could make the site viable.

The Mass Ave area is bursting with housing projects.

To the south, Milhaus Development LLC added 265 units with its Circa apartment project on the east side of College, and TWG plans to add 215 more with its Lockerbie North development across the street.

In addition, a five-story development with about 235 apartments and 40,000 square feet of commercial space is planned for a nearby 1.45-acre site at Massachusetts and New Jersey Street.

Besides housing, a boutique hotel could make sense, said Drew White, a partner at Axis Architecture + Interiors who was involved in a 2007 effort to redevelop the parcel.

White’s firm served as architect for the not-for-profit Riley Area Development Corp. and California-based Panattoni Development Co. on a $100 million mixed-use proposal for the property.

IPS never reached an agreement with the development team, due largely to a lack of available financing and a general distaste for such ambitious projects in a down economy.

The team at the time considered constructing a boutique hotel above the bottling plant, White said.

He predicted that the site has a better chance of getting developed now.

“I think there’s already a buzz being created,” he said. “We’ve had a few developers contact us already.”

IPS’ decision to simplify the development process should attract more interest. Last time, in exchange for control of the land, IPS required a developer to build a new bus facility farther from downtown.

The school district now plans to consolidate downtown bus operations with facilities on the east and west sides, in addition to using contractors.•