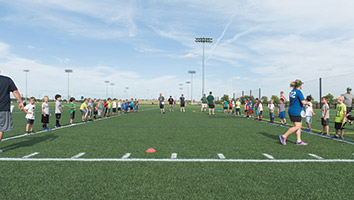 In an arrangement observers are calling unusual, the city of Westfield has been paying hundreds of thousands of dollars in rent and property taxes for land at Grand Park.

Government land is tax-exempt, but the city does not own a majority of the property on which the giant sports campus sits.

“That creates an interesting situation,” said Larry DeBoer, agricultural economics professor at Purdue University. “The bill has to go out. Someone has to pay the property taxes.”

So far, that someone has been—for the most part—the city.

As Westfield acquired land for the park in 2010 and 2011, it entered into purchase agreements to either immediately buy parcels or lease them with the goal of eventually buying them. Under those leases, the city agreed to pay for any increases in property taxes that result from zoning changes and improvements on that land.

The city also agreed to pay all personal property taxes, which are levied on equipment.

DeBoer said the scenario is somewhat similar to governments leasing office space from private owners. But in those cases, the landlord typically still pays the property taxes.

“I actually haven’t heard of anything like that before,” DeBoer said of Westfield’s arrangement.

Todd Burtron, Westfield’s chief of staff, said the approach might not be considered textbook. But he said it is the best strategy for the city as it waits for private development that will add to the tax-increment-financing dollars collected and provide revenue for future land purchases.

“Are there other cities that have done this? I can’t really answer that,” Burtron said.

Westfield residents Craig and Sandra Wood had been interested in selling some of their family’s farmland years before city officials started scouting areas for what would become Grand Park.

They liked the idea of the sports campus and saw the project as an economic gold mine because traveling teams need hotels to stay in, restaurants to eat at, and other places to visit during downtime.

Craig Wood doesn’t remember exactly how the city ended up leasing part of his family’s land rather than buying it immediately, but he perceived it was a better option for the municipality.

“It was a way for the city to basically buy some time,” Wood said. “We were not in any hurry for the ground to be purchased.”

The Wood family owns a majority of the land in the center of the park, and several other private individuals and banks owned the bookend parcels. The 185 acres city officials purchased is mostly on the edges of the park; they leased another 200 acres.

Under the lease arrangements reached at the beginning of 2011, the city leases the land for seven years and is allowed to develop it. Westfield paid $300 per acre per year for rent until the end of 2013. Since then, it has been required to pay the fair market value for farmland rent, which can fluctuate and be higher than $300 per acre.

The city must purchase the property within seven years and the price per acre increases as time elapses. During the first three years, the price was $27,500 per acre. By the seventh year in 2018, the price will be $37,500 per acre.

“It was a financial strategy of the city to get that land under contract,” Burtron said. “We can buy it in installments.”

The land is within a TIF district, which allows the city to keep any new tax revenue generated for use within the zone. The city is betting on private development within that TIF district to bring in dollars to eventually pay for land acquisition. Burtron said up to $13 million could be spent to purchase the remaining parcels.

“We entered into these agreements to be very strategic in how we develop Grand Park,” Burtron said. “We’re turning farm fields into economic drivers.”

“It’s a risk, but it’s not an outrageous risk,” Ketzenberger said. “The potential for the community in terms of tax revenue based on the activity that will occur there will be much greater than it could have been as farmland.”

Hamilton County Assessor Robin Ward, who has worked in the Assessor’s Office for 20 years and is serving her second term, said she has never seen an arrangement like this.

It creates a situation where the city is essentially paying taxes partly to itself, as one of several governmental units that receives property tax revenue.

Some of the parcels the city is leasing are still assessed as farmland, according to Ward, but some have already been rezoned and have had jumps in assessed value, which leads to a higher tax bill that the city is obligated to pay the difference on.

For example, a 40-acre parcel still owned by the Wood family had an assessed value of $79,200 when 2014 taxes were calculated. That spiked to nearly $867,500 this year, leaving Westfield to pay most of the taxes.

“We’re not completely stuck with the tax bill,” Wood said. “It’s divvied up as it should be.”

Ward—who didn’t initially know about the lease agreements—said the assessed-value jumps worried her as property tax bills were sent out. Landowners can appeal assessments, and if successful, throw off property-tax-revenue estimates.

“We’re going to blow this assessment wide open, and this poor little guy is going to get the bill,” Ward said, speaking generally about the private property owners. “I didn’t want this guy to open up his tax bill and have a heart attack.”

She said she called Westfield officials to discuss her concerns and they told her not to worry about it—that an agreement was in place for the city to cover the extra costs.

“I’ve never in the years I’ve been assessing seen anything like that,” Ward said. “Nobody seemed concerned about it but me.”

Burtron said taking on the property tax burden has a neutral impact on the city’s finances since it receives some of the revenue from those taxes.

“It’s kind of like from one pocket to the next,” Burtron said. But the tax payments also go to the county, school district, township and other governmental units.

Eventually, the land should be tax-exempt, city officials said. The parcels already owned by the city are exempt, and the city is applying to exempt the other land it uses for the park but doesn’t own yet.

Will the risk pay off?

On top of property tax payments and land-acquisition costs, annual operating expenses for the park top a million dollars. That pays in part for field maintenance and janitorial services.

Burtron said 2014 operating expenses were $1.5 million and revenue came in at $1.6 million. He said he expects 2015 figures to be similar but added that the city hopes to increase revenue through various sponsorships, including naming rights.

He said the park’s full economic impact remains to be seen.

“I think a lot of people are anxious,” Burtron said. “There’s a lot of merit to the old saying that Rome wasn’t built in a day.”

Wood said developer interest in his family’s remaining parcels hasn’t been as strong as he would have thought by now.

“No one really jumped on it at first,” Wood said.

But interest has picked up recently, which he credits to the two indoor facilities now under construction.

“Not everyone is quite as patient to see if this thing is going to fly,” Wood said. “It is coming to fruition.”•