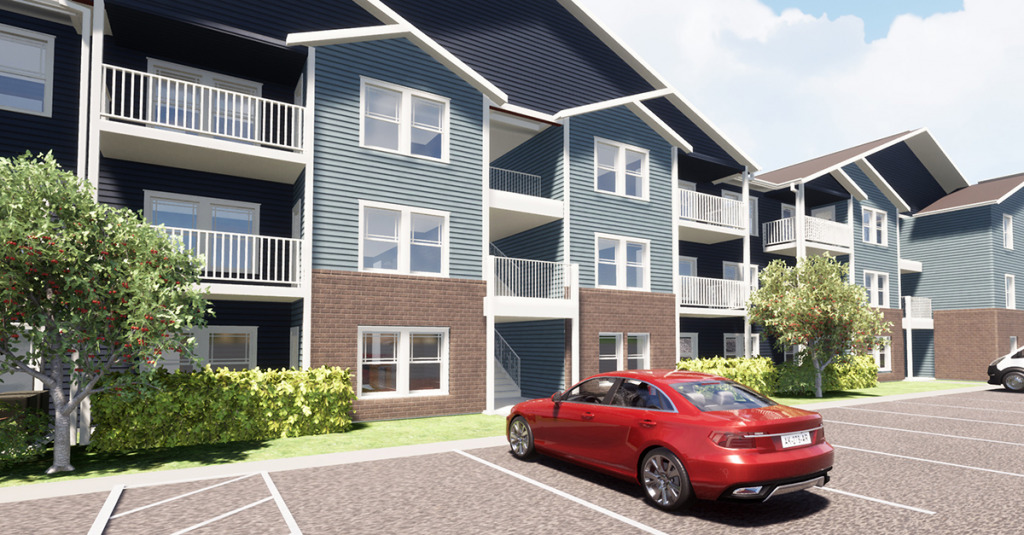 A rendering of Meadows on Main. (Image courtesy of Kittle Property Group)

The project at 3863 S. Main St. is expected to occupy about 13 acres and bear the name Meadows on Main, an homage to its garden-style construction. The project will feature one- to four-bedroom units across 10 two- and three-story buildings.

Meadows on Main will be income-restricted, serving individuals and families generally making 40% to 70% of the area’s median income.

“We feel like this positions us well to support the jobs that are out there with some new housing,” said Jeff Kittle, president and CEO of the firm. “We’ve developed projects in that area, and they’ve been very successful.

“This will really be focused on workforce housing. A lot of [firms] don’t build housing that supports those working in distribution centers and the other jobs popping up around there.”

Development plans provided to the city show the project will also have nearly 530 parking spaces—two per unit—along with bicycle parking. The project first went before Whitestown officials in August.

The firm has secured about $46.8 million in funding for the project. It consists of a $25 million Freddie Mac loan and about $21.8 million in equity, through federal low-income housing tax credits.

Kittle said Lake City Bank is providing a construction loan, with Key Bank providing the Freddie Mac loan for the project. The firm manages about 18,000 apartment units across 20 states, with Indiana being its largest. It expects to add another 2,000 units by the end of 2022.

The project was designed by Kittle’s in-house architectural team. Construction is underway now, with the first building expected to be completed October. The development will be completed about one year later.

Located about 22 miles northwest of downtown Indianapolis, Whitestown has been on a tear in the last decade as residential and commercial development pushes toward the outer boundaries of the Indy metro area. Several mammoth warehousing, logistics and fulfillment facilities have cropped up along Interstate 65 in Whitestown.