Home » Champions of 16 Tech see it as magnet for development, high-tech workers 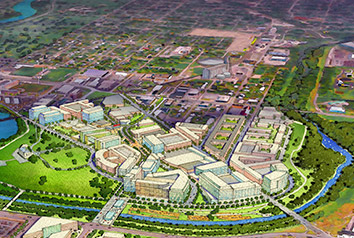 The best way to understand the burgeoning 16 Tech development is to think like a painter.

It’s a focal point for everything else city leaders have been trying to do to make Indianapolis a more vibrant and attractive place for innovative companies and the highly educated workers that power them.

And like any good painting, having a strong focal point can bring the whole canvas to life.

City leaders think that if they make the 60-acre tract of land just north of the Indiana University School of Medicine campus a mix of all of the best the city has to offer—leading companies, urban apartments, retail, night life and parks—they can catch the eyes of more creative and highly sought-after workers.

MORE FROM IBJ
See how 16 Tech will be built.

If those talented workers congregate in one area—both at work and after hours—swapping ideas and insights, there’s a better chance they’ll design new technologies, start new companies and make research discoveries that

are successful, generating large profits and high salaries that can enrich the entire city.

That’s the vision, anyway, for a development that will take 20 years to fully build out its mix of research labs, corporate offices, business incubators, co-working spaces, apartments, retail businesses and parks.

The first big step will come Nov. 9, when the City-County Council votes on whether to issue $75 million in bonds to pay for infrastructure improvements that will get the project off the ground.

Project proponents expect 16 Tech to attract $100 million in private development by 2018 and $450 million in the district’s first decade.

“16 Tech represents an opportunity for the city of Indianapolis to accelerate its economic growth in ways it has not had before by creating a place where talent and innovation and collaboration can all come together. It is enabled by a real estate development, but in the end, it only works if it helps attract talent to Indianapolis,” said Betsy McCaw, chief operating officer of the Central Indiana Corporate Partnership.

The partnership, known as CICP, is an economic development organization funded by the chief executives of the region’s largest corporations, foundations and universities. CICP is one of six entities that have formed the 16 Tech Community Corp. Inc., which has requested the city financing for infrastructure improvements. The other members are the city itself, Indiana University, the IU Health hospital system, the Health & Hospital Corp. of Marion County and the Indiana Biosciences Research Institute.

Not everyone is sold on the idea that having a geographical focal point is more important than having the basics for economic development: good schools and neighborhoods to attract workers, vibrant business networks to generate contacts and ideas, and enough investors and entrepreneurs willing to take risks.

Skeptics point out that the nation’s most successful clusters of innovation and talent—such as Silicon Valley in California and Research Triangle Park in North Carolina—are series of suburban corporate campuses, not the urban “innovation district” envisioned at 16 Tech.

Even the Brookings Institution, which popularized the concept of “innovation districts” in a 2014 report, noted that creating such a district would only work in conjunction with the right mix of talented workers, investment capital and a risk-taking culture.

“Certainly the geography or creating this proximity alone isn’t going to solve those problems. There are certainly institutional and programmatic issues that you need to focus on,” said Jennifer Vey, a fellow in the Metropolitan Policy Program at Brookings, which is based in Washington, D.C.

But Vey, who toured the 16 Tech site in October, added that putting all those factors into a dense place can spark more innovative work and companies.

“By having that proximity and that density, and having the groups to leverage them, it’s from there that you can leverage and foster more collaboration between industries and firms,” she said.

Research in the 1990s by AnaLee Saxenian, a professor at the University of California, Berkeley, showed that Silicon Valley’s inter-dependent network of information technology firms proved more successful long term than the IT sector along Boston’s Route 128, which was dominated by large companies.

Indianapolis has been trying to make a similar shift in life sciences since 2002, when the region’s large life sciences institutions—Eli Lilly and Co., Dow AgroSciences LLC, Roche Diagnostics Corp., Cook Medical Inc., and the IU School of Medicine—created the BioCrossroads business development group. Its primary goal has been to create a thriving cluster of smaller life sciences firms to complement the larger ones.

That effort has had modest success. In the decade after the founding of the BioCrossroads initiative, money spent on life sciences research and companies more than doubled, to more than $25 billion, according to a 2014 report by the Ohio-based consulting firm Battelle.

But the report also found that Indianapolis and the rest of the state continue to lag other states, particularly in research funding pulled in by universities and investment capital attracted by early-stage companies.

So BioCrossroads’ latest strategy is to create the 16 Tech district to focus on attracting highly educated workers, top-flight researchers and venture capital investors into one key location.

BioCrossroads also has helped launch the Indiana Biosciences Research Institute, which will be the anchor tenant of 16 Tech, and aims to recruit more than 100 scientists to do research there focused on metabolic diseases.

“You’ve got to have some place to attract talent that is close to the basic R&D engine that is driving it,” said David Johnson, CEO of BioCrossroads and of CICP. “For us, it’s here. That one centerpiece is in downtown Indianapolis.”

Brookings applied the label “innovation district” to a series of developments that are occurring around the country.

Innovation districts offer a dense environment where established companies, startups, researchers, creative artists and investors can bump into each other. They are almost always near a university or a major corporate campus of a knowledge-based company. And that means they are typically in an urban setting, including a mix of old and new architecture.

For example, the Cortex Innovation Community in St. Louis is a 200-acre district that includes 1 million square feet of new or rehabilitated space, including office space for entrepreneurs, startups and growing companies run by Massachusetts-based Cambridge Innovation Center, wet lab space for life sciences researchers, residential, hotel and retail spaces, and hosts of programs run by its founding institutions.

Since its inception in 2002, Cortex has seen $350 million in investment and the generation of 3,600 tech-related jobs.

Indianapolis leaders have derived lots of inspiration from the effort in St. Louis, which includes the Washington University School of Medicine, the Barnes-Jewish hospital system and life sciences development groups similar to BioCrossroads.

Another innovation district shaping Indianapolis leaders’ thinking is Kendall Square in Cambridge, Massachusetts. It is a 10-acre community with office and lab space, apartments, restaurants, retail shops, and 2.5 acres of open green space.

Since it opened in 2010, the district has attracted startups and commitments from marquee companies to locate workers there, including Oracle, Disney, Amazon, Facebook, Apple, Johnson & Johnson, Twitter, Pfizer, Google and GoDaddy.

The proximity to Harvard and the Massachusetts Institute of Technology is part of Kendall Square’s draw.

The consulting firm Battelle found that innovation districts were helping cities similar to Indianapolis—such as Pittsburgh and Baltimore—outperform Indianapolis in attracting college-educated workers and the employers that rely on them.

A study this year by Battelle, which was commissioned by BioCrossroads, concluded that since the Great Recession, Marion County has been held back, when compared with peer cities like Pittsburgh and Baltimore, because it does not have an innovation district.

Joel Kotkin, an urban studies professor at Chapman University, thinks the recent experience of the Indianapolis area is more of a warning sign against innovation districts than a reason to build one.

Despite some shift back toward urban living, the majority of workers still prefer to live in suburbs, not in the bohemian neighborhoods of cities, he noted.

While Kotkin thinks a medically focused innovation district probably has the best chance of success, he rejects Brookings’ notion that a dense neighborhood is needed to foster the sort of vibrant exchange of ideas required for innovation. The success of Silicon Valley and even Hollywood are proof, he said, that innovation districts develop where there’s already a mass of activity, not the other way around.

“This idea that you have to have high density to have these networks is completely untrue,” he said.

But 16 Tech is getting attention anyway. IU is leaning toward moving its IU Innovation Center to 16 Tech—in part because of the planned participation in Indianapolis’ new district by the Cambridge Innovation Center, which runs offices for startups and fast-growing companies in St. Louis and the Boston area. Those centers provide the kinds of spaces—often times for just one or two people—that are more in demand now than when the IU Innovation Center opened 12 years ago.

“There’s a premium on finding flexible space,” said Bill Stephan, IU’s vice president for engagement. “We’ve done some of that at the Innovation Center. But we don’t have ability to chop up space as readily.”

Stephan said it’s possible IU still might decide to run the center in IU-owned space. But university leaders like the idea of having space for IU researchers and companies that’s connected to lots of other activity.

“It’s going to bring a significant number of potential employers close to the campus as well,” he said. “So the opportunity to have some of our students close to that activity as well is interesting to us.”•