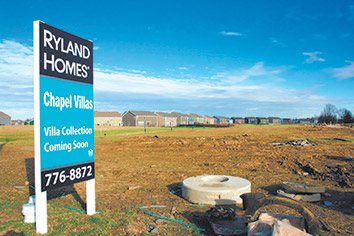 Hamilton County officials are closely watching new-housing prices, knowing that local governments’ long-term financial security could depend on it.

If a residential development doesn’t promise homes with a high enough price tag, a municipality could end up losing money. That’s because, under the state’s property tax caps, lower assessed values might not generate enough tax to cover the cost of city services.

No one seems to know exactly what that break-even price is—estimates range from $250,000 to $450,000—but most developers and government officials agree anything below $200,000 is no longer worth approving.

“There are so many variables in the equation,” said Christy Langley, Noblesville planning department director. “It is very difficult to pinpoint.”

More than 1,500 single-family building permits have been filed this year in Westfield, Carmel, Noblesville and Fishers. And the median price of new homes in the county has increased nearly 14 percent from September of last year, to $230,000.

“The good news is, people want to live in Hamilton County,” Noblesville City Council member Greg O’Connor said. “The bad news is, how do you handle it?”

While municipalities search for other revenue, many have implemented infrastructure requirements for home construction to drive the prices up, but that’s not a tactic everyone in the industry supports.

The tax caps were phased in starting in 2009 and sealed into the state constitution in 2010. The law limits homeowners’ tax bills to no more than 1 percent of their home’s assessed value—unless extra funding is approved in a referendum.

While the caps can save taxpayers money, local officials argue they make it more difficult to provide essential services, including police and fire protection, and street improvements, snow removal and trash collection.

“That’s pretty much all we’ve been talking about for the past four years,” Langley said.

O’Connor said Noblesville has continued to pay for services by identifying other revenue sources and trimming spending, but as the growth continues, the city will need more staff, new equipment and better infrastructure.

“If you want ‘X’ number of policemen and firemen, we need this revenue to maintain that level,” O’Connor said. “The one thing we absolutely don’t want is not have the public safety in place that people expect and want.”

“We need as much assessed value as possible,” Fadness said.

David Bottorff, executive director of the Association of Indiana Counties, said he hasn’t heard of other counties becoming increasingly concerned about new-housing prices, but acknowledged that the tax caps “may [have] exaggerated an issue that was always considered—about the number of people moving into a community versus the stress on schools or roads.”

In Hamilton County, officials are taking the situation seriously.

Last year, Langley and her staff in Noblesville started compiling a financial analysis for proposed housing developments to show what property taxes could be generated from estimated assessed values and what it would cost to provide city services to the subdivision.

She described the analysis as a “very, very crude” estimate.

For The Retreat at Mill Grove, a 63-lot development proposed by Grand Communities Ltd. and Equicor Real Estate LLC, the average expected assessed home value is $320,000.

By Langley’s calculations, the city would collect about $122,600 in yearly taxes and distributions—from property taxes, income taxes, cigarette taxes and more—from the homes and the people who live in them. Meanwhile, the city would spend $41,200 to provide police, solid waste and road maintenance in the subdivision.

That makes The Retreat at Mill Grove a revenue winner.

But some argue taxes from new developments aren’t the only financial benefit to a community.

“I think that notion that you have to have a certain price point has some flaws,” said Kate Collins, director of government affairs for the Builders Association of Greater Indianapolis.

A 2013 study from the National Association of Home Builders found that, for every 1,000 single-family homes constructed in Indiana, income increases by a collective $156 million and more than 2,700 jobs are created.

The impacts were calculated assuming an average home price of $204,111.

“How do you pay for it ultimately?” O’Connor said.

But regulations have slowly been introduced throughout the county to get that result, such as preferences for larger square footage.

So far this year, the average square footage of a new home in Noblesville is more than 4,300. In 2006, the average was 3,287 square feet. Langley said 2,200 square feet is the smallest homes the council will likely consider.

The Noblesville City Council also imposed some architectural requirements, including the elimination of vinyl siding as an option.

“That’s what is keeping the price point where they want it to be,” Langley said.

Boomerang’s Thompson said that, 10 years ago, area towns and cities legislated far fewer infrastructure particulars in terms of roads, curbs, sidewalks, and sewers and other utilities.

“It’s virtually impossible for me to provide a new home for less than $275,000,” Thompson said. “The amount of infrastructure that we’re required to put in per house is just incredible.”

“Any time you add additional regulations and fees, it’s just going to get added on to the cost of the home,” he said.

Thompson said he would like more research on what it costs communities to provide public services per household or neighborhood, so the actual price point that benefits developers and municipalities can be determined.

“You can make those numbers look however you want to—on both sides of the argument,” Thompson said. “There needs to be that honest discussion and dialogue. … What does it really cost to provide services to new homes?”

Data from BAGI shows that 63 percent of central Indiana demand is for homes priced lower than $275,000.

That’s true even in Hamilton County, which has some of the highest per-capita incomes in the state. The county has a large retail sector and those employees have an average salary of $28,500. With lending standards typically qualifying a prospective homebuyer for a loan that is 2-1/2 to 3-1/2 times his or her salary, a retail worker couldn’t afford a home above $100,000.

“Believe me, if I had a project of homes that were more affordable, they would sell really quickly,” Thompson said. “If you want a new home in Hamilton County, you need a good income.”

In the finance and insurance sector, which has nearly as many employees in the county as retail does, the average salary is nearly $70,000, according to data from the Indiana Department of Workforce Development. That wage would allow someone to buy a $175,000 to $245,000 home.

“In Hamilton County, it looks like that’s where we’re headed,” Langley said. “You can tell by just driving through—that’s kind of the future.”

But Fadness said Fishers should be able to maintain a portion of more affordable housing because it has older homes mixed in with the new developments.

O’Connor said the Noblesville community could have a large portion of similarly sized houses, especially as empty-nester neighborhoods continue to be popular.

“I think a lot of that is driven by what the consumer wants to buy,” O’Connor said. “You can get a little homogenous.”•