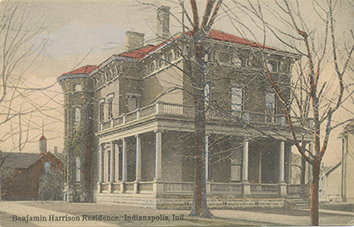 For much of the first century of the city’s existence, professional and financial services in Indianapolis were intertwined. Many of the city’s prominent attorneys were involved with starting and expanding Indianapolis banks. That was mostly because the first banks in the state’s capital city were established by the General Assembly, and attorneys then, as now, often served as elected public officials.

Calvin Fletcher and his brother, Stoughton, were involved with the Second State Bank of Indiana after 1834. The Fletchers would go on to establish a bank in 1839 that would become American Fletcher National Bank, one of the bulwarks of the city’s banking industry for much of the 20th century.

During the Civil War, Congress passed the National Banking Act to rein in the issuance of state currency. In May 1863, entrepreneur William H. English headed a syndicate that organized the First National Bank of Indianapolis as a nationally chartered financial institution. Several more nationally chartered banks opened in Indianapolis during the last two years of the Civil War.

Bookkeeper John Peter Frenzel took advantage of an 1869 state law to organize one of the first savings banks in Indianapolis, the Enterprise Building and Loan Association. Savings and loans, as they became known, had the mortgage field to themselves until 1890 because state law prohibited banks from making mortgage loans.

The Panic of 1893 and another panic in 1907 decimated the bank and savings and loan industries in Indianapolis as well as nationally. Survivors included Felix McWhirter’s People’s Deposit Bank and the Frenzel family’s Merchants National Bank and Indiana Trust Co.

Calvin Fletcher, who helped organize the predecessor of American Fletcher, was among the city’s first and most prominent attorneys. Fletcher defended the accused in the Fall Creek Massacre in the 1830s and later defended freedmen being shipped back to slavery. Civil rights law was an active practice during the Civil War, with numerous state and federal sedition cases filed against local Copperheads.

Indianapolis lawyers in the latter 19th century were active on the national political scene. Benjamin Harrison was elected United States president in 1888, and Thomas Hendricks, who founded one of the city’s most prestigious firms during the Civil War, went on to the White House as Grover Cleveland’s running mate.

The Indianapolis Bar Association got its start in 1878 with 40 founding members and grew to more than 300 members by 1920. The Marion County Bar Association was founded by a group of the city’s African-American attorneys in 1924.

The first half of the 20th century saw the founding of numerous law firms that would dominate the practice of law in the city, including Barnes Hickam Pantzer and Boyd (which would become Barnes & Thornburg) in 1949. Baker & Daniels, which was reorganized in 1944, traced its origins to the firm founded by Thomas Hendricks in 1863. Harry Ice joined the firm of Henley Matson and Gates in 1929 and laid the groundwork for what would become Ice Miller 30 years later. Bose McKinney & Evans was formed in postwar Indianapolis by attorneys Lewis C. Bose, Bill Evans, Paul Buchanan and Bob McKinney.

The 1920s were boom years for Indianapolis financial institutions. American Fletcher was the city’s largest bank, and Morris Plan, founded in 1921 by local businessmen, and Railroadmen’s Savings and Loan Association dominated the building and loan market. But the onset of the Great Depression in the fall of 1929 devastated the capital city’s financial community. From 1927 to 1933, 10 Indianapolis banks closed their doors, although Merchants, American Fletcher and Indiana National Bank survived.

The postwar era saw additional consolidation, and the Big Three banks continued to expand from 1950 into the 1980s, building signature towers downtown. The savings and loan industry was affected by the high interest rates of the 1980s and several local institutions, including Union Federal Savings and Loan Association, were acquired by out-of-town financial firms.

That trend accelerated into the 1990s. The decade witnessed the continuation of a troubling trend in the Indianapolis economy. Inaction on statewide branch banking by the General Assembly in the 1970s and 1980s opened the door to out-of-state takeovers of most of the city’s hometown banks.

Merchants National Bank, Indiana National Bank and American Fletcher were acquired by Ohio and Michigan banks. The merger-and-acquisition trend accelerated in the 1990s when two of the city’s biggest banks became part of a super bank as the result of the First Chicago-NBD and BancOne merger in 1998. The entry of Union Planters, a Memphis, Tennessee-based bank holding company, into the market the same year was a clear sign that large local banks were becoming a rarity, at least in Indianapolis.

As mergers swept through the state, several financial institutions based elsewhere in Indiana—including Old National in Evansville, First Merchants in Muncie and Star Financial Group in Fort Wayne—established a presence in the metropolitan banking market.

Consolidation of financial institutions continued apace in the 21st century, and millennials who were comfortable with banking with Chase and Regions could be forgiven if they had never heard of Merchants, Indiana National or American Fletcher. Banking in the Hoosier capital became less about bricks and mortar and more about automated telling machines and Internet banking, and trends suggested that technological change would continue to be a fact of life in the financial industry.

National brokerage houses that several generations of Hoosiers trusted to handle their investments changed during the period. Merrill Lynch became an arm of Bank of America and Lehman Brothers disappeared in the wake of the 2008 crash. Retail brokers such as Edward Jones, Raymond James and Charles Schwab competed for customers locally.

The city’s big law firms also executed a number of mergers with out-of-state firms in the 21st century. Baker & Daniels merged with Minneapolis-based Faegre and Benson in 2012. Ice Miller, which began expanding in the late 1990s, merged with the Ohio regional firm of Schottenstein Zox and Dunn Co. LPA, which added nearly 100 lawyers and new offices in Columbus and Cleveland. Barnes & Thornburg, which remained Indianapolis-based, opened offices in Chicago, Atlanta, Minneapolis, Los Angeles, Wilmington, Delaware, and Washington, D.C., in 2011. Bingham McHale of Indianapolis merged with Greenebaum Doll & McDonald LLP of Louisville, Lexington, Frankfort and Cincinnati to form a major new firm in the Ohio Valley.