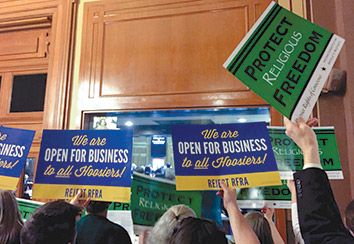 The fight over whether sexual orientation and gender identity should be protected under Indiana’s civil rights law is sure to consume substantial time and effort during the legislative session that begins in January.

But that debate isn’t likely to be waged on the air through a wave of television and radio ads—even though the state’s biggest businesses say enshrining those rights in state law ensures they can continue to attract and retain top talent in the state and opponents say doing so could hamper religious rights.

Instead, advocates on both sides of the contentious issue say more important than spending money is talking quietly to lawmakers one-on-one about gay rights. It’s about creating friends, not enemies, at the Statehouse, said Indy Chamber President Michael Huber.

“What we are not talking about is some kind of multimillion-dollar mass media marketing campaign,” Huber said. “It’s been one of relationship building. We’re having the most success in privateconversations with influencers at the Statehouse where we just talk about the future.”

That’s not because groups aren’t willing to spend money. There are immense resources that could be brought to bear by companies—including Eli Lilly and Co., Cummins, Salesforce, PNC Bank and others—who have already staked their positions, said Bill Oesterle, the former Angie’s List CEO who has been an outspoken advocate for LGBT rights.

“I’ve never heard in any meeting anyone discuss it in terms of, ‘How much is this going to cost?’” Oesterle said. “It’s kind of telling that the dollar amounts are absent from those discussions. When something is a movement, people don’t talk about it in those terms. There’s a substantial amount of energy that is accessible here.”

There are also several groups already marshaled around the cause.

Indiana Competes, a coalition of more than 150 businesses, plans to harness the influence of companies by showing LGBT rights are important from an economic development standpoint. Eli Lilly, for instance, has already donated $75,000 to support the effort.

“Human capital and workforce development has replaced low-cost regulatory climate as the No. 1 factor in what drives thriving economies,” Huber said. “That’s not to say we’re doing it wrong, but it’s all about talent now.”

Tech For Equality, a group of tech companies convened by Oesterle, is also trying to convince lawmakers that this is a talent development issue for them. 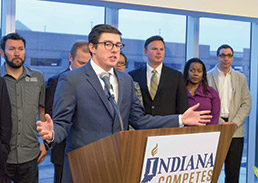 “It’s really more about having people who are business leaders willing to have conversations with lawmakers, putting their name to it and saying where they stand [versus] putting big dollars behind something,” said Tech for Equality spokeswoman Megan Robertson.

The companies involved in Tech for Equality haven’t been asked to donate money toward the cause, Robertson said. But it’s not to say they wouldn’t.

Kristen Cooper, a vice president of Fishers-based startup Sticksnleaves, part of Tech for Equality, said the company “has not written a check” to support the LGBT civil rights measure. But it’s certainly something we would consider.”

“If there is an opportunity for people in the industry to show up and represent the ideology that diversity is incredibly important, we want to make sure we represent that message,” Cooper said.

Then there’s Freedom Indiana, the grass-roots group that has mobilized each of the last few years to rally support for LGBT Hoosiers. The group had a budget of $2 million to fight against the constitutional amendment banning gay marriage in the 2014 legislative session.

Spokeswoman Jennifer Wagner de-clined to share the group’s budget for this year, but said it is most likely to spend money on paid media in the form of boosting social media ads—not buying air time on television or radio.

“We’re in a different boat than these other organizations because we already have the infrastructure in place,” Wagner said.

There’s also sure to be national groups mobilizing in Indiana, such as the Human Rights Campaign. The group has donated $50,000 to the Freedom Indiana campaign already this year.

Another group, Freedom for All Americans, is helping both Freedom Indiana and Indiana Competes with legislative strategy, communications support, and digital and online work. The group declined to comment on the specifics of its financial investment.

“Because we’re trying to advance something proactive and do something really positive instead of fighting something negative, by nature it requires a longer-term investment in time, money and staffing,” Executive Director Matt McTighe said.

But again, the goal isn’t to buy support through massive media campaigns. It’s to earn it through reason and conversation. And the opponents of the proposal to give rights to people in the LGBT community say that’s their approach as well.

Micah Clark, executive director of the American Family Association of Indiana, said his organization has done targeted paid TV, radio and newspaper ads in past campaigns. But he agreed that it’s more important in the upcoming legislative session to have one-on-one conversations with lawmakers.

The Indiana group was a key supporter of last spring’s Religious Freedom Restoration Act, but Clark criticized Pence for signing the “fix” to the bill that clarified it could not be used for discrimination.

Still, Clark isn’t ruling out paid media, if he thinks it will make a difference.

“It’s possible that if it gets down to swinging one or two votes, that will be something that we’re going to look at,” Clark said. “We don’t have a lot of resources to do that, anyway.”

Two other vocal groups against the LGBT civil rights amendment—Advance America and the Indiana Family Institute—did not respond to IBJ’s request for comment.

Some groups are focused on saving their money until the 2016 gubernatorial race kicks up in intensity.

Indiana’s AFL-CIO said it supports the fight to include sexual orientation and gender identity into the state’s civil rights law. But Brett Voorhies said it probably won’t focus many financial resources on that effort.

“We’re not going to get dirty or put a lot of finances into it, but we’re there to stand beside and help in any way we can,” Voorhies said. “I’m being very, very frugal right now. We’re socking away everything possible for the 2016 fight.”

Indiana House Minority Leader Scott Pelath, D-Michigan City, said it helps to have major businesses advocating for LGBT rights. But he said their influence on lawmakers might depend on how far they’re willing to go to tackle the issue—and that could mean targeted commercials or mailings.

“It’s one thing to educate lawmakers, but on major issues where people tend to have pre-set and long-standing positions, lawmakers will change as their constituents are educated and change,” Pelath said. “That’s where the effort needs to be made. If it’s kept at the level of inside ball, there’s more of a chance you’re going to get what you’ve gotten so far. It’s their resources. That’s up to them.”

Republican legislative leaders said they have no problem with businesses advocating their positions. But House Speaker Brian Bosma dismissed gay or transgender rights as a crucial economic development issue.

“Indiana’s business climate is the best in the Midwest and on a dozen lists,” Bosma said. “We’ve had dozens of announcements of businesses flocking to Indiana from [other states]. Folks must not be too concerned about our current system of having human-rights ordinances in many of the metro areas and not having protected-class status in the civil rights code. Having said that, I understand that there are concerns and it’s a valid topic.”•