Home » LOU’S VIEWS: Picks for the months ahead

Happy New Year … a new year that you can make happier by planning to attend more Indy arts and entertainment events than you did last year.

Here’s a starter list of some of the promising offerings that lie ahead. (Of course, I’ll give you weekly updates on my A&E Priority List at www.ibj.com/arts.)

Out of This World: Cosmos Music Festival

A trio of concerts looks to the skies. First, music that is included on the space probe Voyager, including Stravinsky’s “The Rite of Spring” and Beethoven’s “Symphony No. 5.” Next, of course, “The Planets by Holst,” with the Indianapolis Symphonic Choir adding vocal power. Finally, “Also Sprach Zarathustra” and other music from the film “2001: A Space Odyssey.” Hilbert Circle Theatre, Jan. 22-Feb. 6

In the midst of a heavy season of Stephen Sondheim musicals (other works by the composer are being staged at Footlite Musicals, Buck Creek Players, and Theatre on the Square in the coming months), Actors Theatre of Indiana takes on perhaps his greatest creation—a bloody musical-theater masterpiece about a wronged barber out for revenge. Studio Theatre, Jan. 29-Feb. 14

It’s the first-time-in-Indy appearance for the Tony-winning heartbreaker about a street musician who—well, if you don’t already know from the movie, then let yourself get lost in this low-key-but-powerful story featuring a terrific score played by onstage musicians. Clowes Hall, Feb. 9-14

“Voices of a Generation: The Folk/Rock Revolution”

Nick Owens and David Hochoy once again split the choreographic chores—as they did with 2014’s “Ray & Ella”—for this Dance Kaleidoscope tribute to the music of the 1960s. Indiana Repertory Theatre, Feb. 25-March 6

August Wilson’s 1987 Pulitzer-winner—perhaps the best known of his cycle of 10 plays, each set in a different 20th-century decade—gets a revival at IRT. Its focus is a former Negro League baseball star working as a garbage man in 1950s Pittsburgh. Indiana Repertory Theatre, March 9-April 3

Music from the original series through the J.J. Abrams’ reboot film is included in this symphonic orchestra tour, which also features video projection of scenes and montages from five decades worth of incarnations. Murat Theatre, March 18

Visitors can touch a meteorite, manipulate a robotic arm, take a Turing Test to determine if a question’s answer came from a human or a computer, and create their own planets in this visiting exhibit that includes an appearance from R2D2. The Children’s Museum will continue to look to the skies with a new permanent exhibit, “Beyond Spaceship Earth,” scheduled to open in the summer. Children’s Museum of Indianapolis, March 12-May 1

Indiana’s bicentennial is celebrated in visual art at this long-range show culled from the museum’s permanent collection as well as from collectors, artists and other institutions around the country. Indiana State Museum, March 19-July 21

When Sinclaire appeared at the Songbook Gala in 2014, his tribute to Nat King Cole led me to write that he “managed to put truth into every syllable with a sound that sent me running to YouTube as soon as I got home. I can’t recall a time when I so quickly became a fan of a performer. Here’s hoping he finds his way here for a full concert soon.” Well, he has. And I’m excited. Palladium, April 16

It’s not a new concept, but it can be a fun one when artists are assigned to design miniature-golf holes. The temporary set-up at the IMA will feature a course looking at the history and culture of Indiana. Indianapolis Museum of Art, May 5-Oct. 30 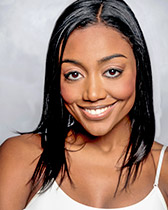 Patina Miller (Photo courtesy of Cabaret at the Columbia Club)

It’s tough to pick out just one performer from the strong list put together by the folks at the Cabaret at the Columbia Club. The early 2016 lineup includes Joshua Henry (terrific in Broadway’s “Violet”), Ramin Karimloo (recently of the “Les Miserables” revival), plus Lea DeLaria, Marin Mazzie, Annaleigh Ashford (singing disco songs?!), and Jane Lynch. For now, how about Patina Miller, star of “Sister Act” and the recent “Pippin” revival, who also appears on CBS’ “Madame Secretary”? Cabaret at the Columbia Club, April 29-30